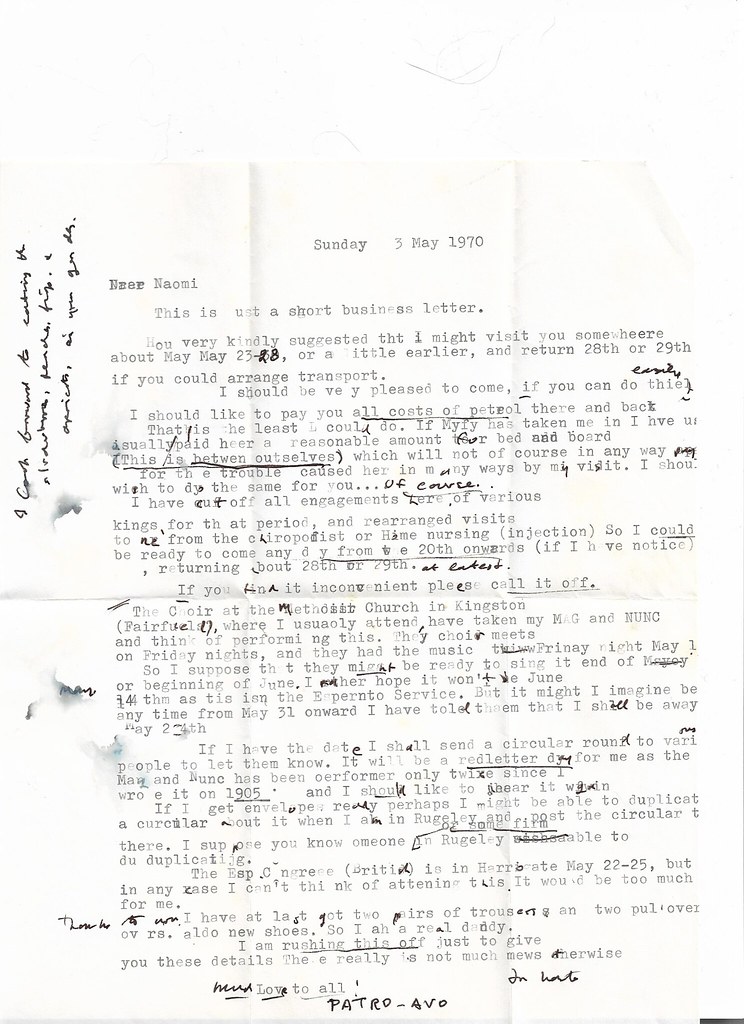 This may be the last letter my grandfather ever wrote. It was written on the 3rd May, 1970. The envelope was post marked on the 4th, and the addressee, my aunt Naomi, probably received it on the 6th (for my grandfather used a second-class stamp). By that time, however, the writer was dead. He was found on 5th May, in his bath, having died from heart failure.

In case you're having trouble with the typos, handwritten corrections, cut-off words, and the stains from Naomi's tears, I've made a tidy transcript:

This is just a short business letter.
You very kindly suggested that I might visit you somewhere about May 23, or a little earlier, and return 28th or 29th if you could arrange transport.
I should be very pleased to come, if you can do this easily.
I should like to pay you all costs of petrol there and back. That is the least I could do. If Myfy has taken me in I have usually paid her a reasonable amount for bed and board (this is between ourselves) which will not of course in any way […] for the trouble caused her in many ways by my visit. I should wish to do the same for you…. Of course.
I have cut off all engagements here, of various kinds, for that period, and rearranged visits to me from the chiropodist or home nursing (injection). So I could be ready to come any day from the 29th onwards (if I have notice), returning about 28th or 29th at latest.
If you find it inconvenient please call it off.
The Choir at the Methodist church in Kingston (Fairfield) where I usually attend, have taken my MAG and NUNC and think of performing this. The choir meets on Friday nights, and they had the music Friday night May 1st, so I suppose that they might be ready to sing it end of May or beginning of June. I rather hope it won’t be June 4th as this is the Esperanto Service. But it might I imagine be any time from May 31 onward. I have told them that I shall be away from May 24th.
If I have the date I shall send a circular round to various people to let them know. It will be a red letter day for me as the Mag and Nunc has been performed only twice since I wrote it in 1905, and I should like to hear it again.
If I get envelopes ready perhaps I might be able to duplicate a circular about it when I am in Rugeley and post the circular there. I suppose you know of some firm in Rugeley able to do duplicating.
The Esperanto Congress (British) is in Harrogate May 22-25, but in any case I can’t think of attending this. It would be too much for me.
Thanks to you, I have at last got two pairs of trousers and two pullovers. Also new shoes. So I am a real daddy.
I am rushing this off just to give you these details. There really is not much news otherwise. In haste,
Much love to all,
PATRO-AVO

I look forward to eating the strawberries, peaches, figs and apricots, in your garden.

It's a very ordinary letter, but I think his personality comes through quite strongly, all the same. One thing I'm struck by is how much Avo lives in the future. (He was 86 when he wrote this, which in those days was a fair age.) It's all about his plans and arrangements, and even his one moment of looking backwards (to 1905) is in the service of a splendid future revival.

Otherwise, that combination of anxious consideration for others with a garrulous focus on his own affairs fits what I know of him, and indeed what he wrote of himself. For yes, he wrote his own obituary for the Esperanto Association ("to help them when I die"), and in it he remarks:

What chiefly attracted him to Esperanto was the amazing beauty and literary capability of the language; propaganda stunts and organization problems interested him little except as necessary evils. As a lecturer he was at home on the platform - if he had to speak on a definite subject - and he knew how to keep the attention and interest of an audience of children. But he was a social failure, being too shy to make friends and unable to take part in small talk; he was happiest when alone. An inability to remember faces was a life-long handicap, and a continual source of embarrassment. He loathed controversy, but was forced continually to write controversial articles in reply to opponents of Esperanto, or on other matters - this was necessary and useful work, but foreign to his nature, and (he felt) sometimes increased his isolation and endangered friendships.

I can't pretend that I don't recognise my own character in quite a lot of this - and certainly my prosopagnosia. What he might have made of an age of people being so profligately Wrong on the Internet, though, I shudder to think.
Collapse