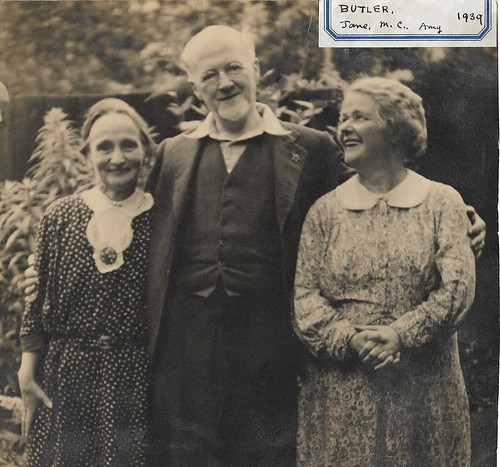 I came across this 1939 picture of my grandfather, aged 55 (to my eye he looks rather older - perhaps because he remained pretty much like this until his death thirty odd years later), with my grandmother to his left. On the far left of the picture is cousin Jane, one of the two sisters immortalised (if such a thing can be claimed for a book long since remaindered) in Llewelyn Powys’s Skin for Skin, as detailed here. I'm particularly pleased to have Jane as an adult, as I only had pictures of her in childhood and old age until now.

Anyway, along with the picture, my grandfather had saved a contemporaneous clipping, 'reviewing' his performance as an Esperanto propagandist ('propaganda' was his word). He was indefatigable in this activity, clocking up an average of 178 lectures a year in schools and similar places over the years 1936-39. I feel this review conveys the experience of being in his audience rather vividly.

"As Others See Us!"
Having received several conflicting accounts of this language, I entered the Hall with mixed feelings, and awaited the arrival of the lecturer, Mr. Butler.

He had a captivating appearance. He literally jumped on to the platform, and gave the table such a hearty hug that that dignified piece of furniture shuddered. He beamed on us with a truly Pickwickian smile, and began his narrative of the events that led up to his first acquaintance with Esperanto. I was fascinated with his appearance. He had a high forehead, bright glasses, and a perfectly adorable little beard that waggled as he spoke.

Next he fixed up his simple apparatus, the while he entertained us with humorous anecdotes. Then he seized a packet of envelopes in which were letters and words in various colours. It is surprising how the appearance and nature of a speaker can influence one, and this speaker had personality. I was interested in his subject, perhaps, because I grasped the fact that it saved a good deal of work, which I regarded as most important. He waxed eloquent--he waxed so eloquent that his dear little beard wiggled and waggled, his eyes flashed and sparkled, and he gesticulated to an alarming extent. The real object of his lecture was somewhat lost to me in the enchanting music of his voice. He was just finishing his talk, when the same annoying clamour that releases us from our tutors sounded over the building. It was with infinite sorrow that I arose: I shall long remember my first lesson in Esperanto.