I just told this anecdote to my friend Clémentine, but thought I might leave it here too, as offering an insight into my upbringing and character...

When I was in primary school I lived in a house with a stream at the bottom of the garden. There were two mallard ducks that used to walk up to our house, and we’d often feed them bread: we called them Walter and Emily.

One day in Spring, they appeared with six fluffy little ducklings in tow, and at school that day, on being instructed to draw something in pastels, I was inspired to sketch their offspring. I have no talent at all for drawing, but this was a pretty good picture by my standards (I was about 8 at the time), and my father, an art teacher who no doubt hoped I would follow at least a little way in his footsteps, preserved it. He even had it framed, and for many years it hung just outside the downstairs toilet.

Eventually I went on, as you know, to have a simply glittering career as an academic and novelist. My father read and sometimes quite liked my books, but he would always cast a sentimental eye in the general direction of the toilet, as if to say, “What genius you had in those days!”

Once, when my children were fairly young – but old enough to read between the lines of adult conversation – I asked my father what he saw in that bloody picture. I mean, it was quite good for an eight-year-old, but really nothing special. Hadn’t I surpassed that achievement, albeit in other fields? He could be very vague when he wanted to, and replied to the effect that Isaac Newton had already made his greatest discoveries by the time he was 23 – it was a common story…

My children, ever after, teased me mercilessly about it. Every time we visited, they would rush to ‘The Six Chicks’ and exclaim, “This really ought to be a museum!” Once or twice I threatened to throw it out, but especially after my father died they said (in so many words) that to do so would be a double sacrilege, compounding iconoclasm with filial impiety. I knew this was bullshit, but it was enough to stay my hand.

And so the picture still sits in the room where I type this. I haven’t hung it on the wall – that’s the extent of my rebellion – but it leans against the skirting board, a mute reminder of the vanity of all things. 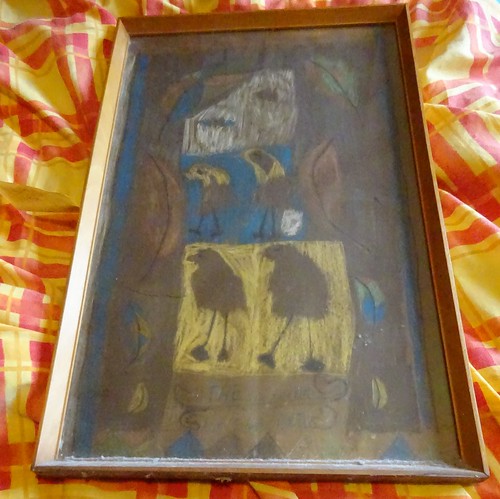