I've not posted in the last few days for lack of matter and fear of repetition, but I'm looking in just to reassure you (I know you were worried) that I and mine are still well. I've actually been pretty busy with work, in fact, both teaching and research.

My teaching I'm doing, not via Zoom but Blackboard Collaborate Ultra - the hipster's choice. As for research, I've been continuing my "deep dive" into British views of Japan (and particularly Japanese children) during the Meiji period. This is all background for my projected book on British children's literature in Japanese popular culture. Not that I quite have a contract for that book yet, but the signs are promising. The reports on my proposal were both positive and constructive - which can't always be said of reader reports. Anyway, if it comes off it will keep me happily occupied for the next year or two.

Although... if it's not possible to travel to Japan it will be a lot harder, and I also wonder selfishly whether the research leave I'm due in autumn next year may fall victim to the inevitable retrenchment at British universities, where recruitment (especially from lucrative overseas students) may well crash if social distancing lasts much longer. No one's said anything of that kind yet, but my paranoia has a pretty good record in the gentle art of soothsaying.

On the domestic front, I'm still rather worried about Jessie. A couple of days ago, I walked into the living room to encounter something resembling a murder scene, with blood spatters on furniture, bookshelves, carpet.... (Clearing it up gave me a lot more sympathy than I ever expected to have with axe murderers - the stuff really gets everywhere!) I thought that she must have picked at her eye wound, but in the 48 hours since I've become convinced that the blood is actually coming from her nose, and this morning I was able to obtain photographic proof, as she was sleeping.

Is this part of the healing process, or is something more serious going on?

On a more positive note, I've started growing my own shiso plants, with a view to getting an aromatic salad ingredient and a tasty garnish. But first they must run the gauntlet of my overwatering. 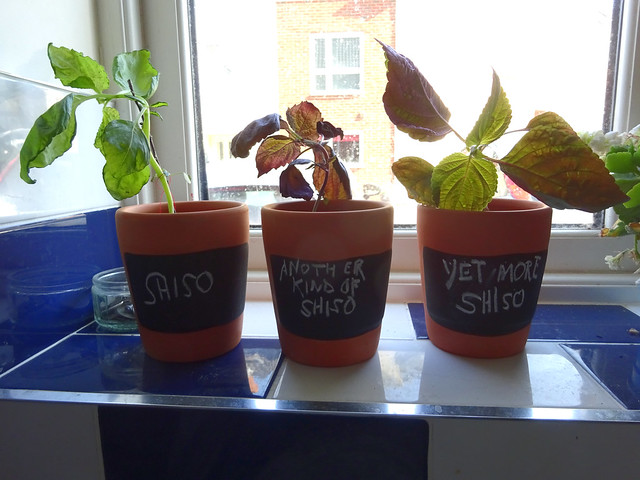