My lockdown regime, generally speaking, will involve a daily trip to Tesco - via the hilliest route in this hilly city, so as to get my cardiovascular system going, i.e. a footpath over the railway cuttings of St Werburghs. However, although supermarkets are booming (and, to be fair, their logistical expertise and the labour of their workers are what's holding this country together right now, along with the NHS), I don't want to let the Gloucester Rd wither on the bough. Today I had to walk down it anyway, to fetch some medicines for Jessie, and took the opportunity to buy supper at the fishmonger - now using such extra measures as six-foot-distant customer-queuing positions painted in yellow on the pavement, and contactless payment through the window glass: 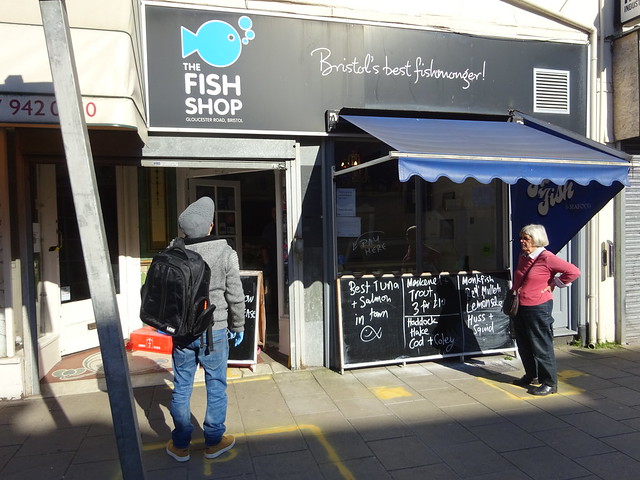 A minority response to the lockdown has been to go on an arson spree. I saw a burned out electric bicycle on the footpath to Tesco yesterday; and today I read that arsonists have burned out two Iceland food delivery vans in Bristol, while Asda has been similarly targetted in Weston-Super-Mare. I'd suspect a motive of letting the old folk starve, had the skateboard park under the M32 not been torched as well.
Collapse