We're repeatedly told that there is enough food, etc., for all, if only people would stop panic buying. Panic buying, as the name implies, is an irrational behaviour taken as a whole; but for individuals in a panic-buying environment, there is a point at which it becomes rational, because if you don't stock up you won't be able to buy anything at all. No doubt the game theorists have a word for this moment when, like one's reflection in a concave mirror at a certain distance, all is suddenly inverted.

Perhaps we have seen, too, the birth of a new emotive conjugation: "I stockpile; you hoard; they panic buy."

One of my Skype friends in Japan tells me that, in Hiogo Prefecture, where schools have been shut because of the virus, rather than move classes online or even send worksheets by email, teachers on bicycles are hand delivering lessons to each pupil's house. This seems very Japanese, almost to the point of parody: toilets from the 21st century, but a lot of other things from the middle of the twentieth of earlier. (This combination is of course is hugely appealing to me.)

I mentioned this to Moe yesterday, as we took a 1-metre distant walk around Ashton Court. She told me that in Japanese hospitals (she was a nurse in Osaka) patient notes are even now generally written up by hand rather than entered into a computer - because the senior doctors can't or won't get their heads round the technology. She was meant to be going back to Japan in a month or so, but is planning to take the opportunity to go earlier - next Tuesday, in fact - because, well, who knows whether it will even be possible in a few weeks? Even as it is, she can only go to Tokyo, and will have to be collected by her father to travel to Osaka (no shinkansen for anyone coming from abroad), before spending a fortnight in her room. What a sad way to end her time in the UK!

At least we saw a nice Banksy-eseque piece of art in the underpass as we walked: 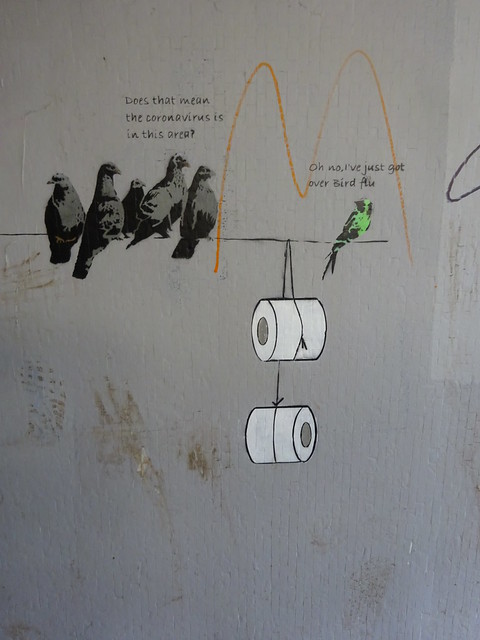 A few days ago, I reflected on Facebook that, just as there are no atheists in foxholes, in a pandemic everyone's a socialist. Today, apparently, we have the Daily Telegraph calling on the Tory chancellor (late of Goldman Sachs) to introduce socialist policies. Even in times of plague, there are some pleasures to be had.
Collapse