I decided to make occasional notes of developments here as they happen, because this is the kind of long-running crisis where it's going to be very difficult to remember how things used to be, or the order they happened in, even after a short time.

After several days insisting that those calling for more severe measures were speaking from a position of ignorance (which was admittedly true for many of them), and that the previous softly softly catchee lurgy approach was informed by the most sophisticated modelling techniques available, yesterday the government did a handbrake turn. They apparently just noticed that, actually, yes, their previous approach would inevitably lead to the NHS being overwhelmed 8 times over, and around 250,000 deaths, much as people had been warning them. Instead, we're being sort of locked down for the foreseeable future, perhaps until a vaccine is developed, maybe 18 months in the future. Interesting times have never been so dull.

Sort of? Yes, because people are only being "advised" not to go to restaurants and pubs. The result of course is that restaurants and pubs will close and probably go out of business but will be unable to claim on insurance. It's a policy that could almost have been devised to sacrifice small businesses while protecting large ones (there will be a rescue scheme for Richard Branson yay). Sign here if you want to object to this.

Also, while most of us have been told to avoid social contact, and many groups (including pregnant women) have been told to self-isolate entirely, schools are still open. Apparently this is what the science advises, but I've heard no explanation why, and it's deeply counterintuitive. Perhaps the children I've known have been the exception, but personal hygiene and avoiding physical contact isn't generally their forte. And, since they tend to be asymptomatic, they are especially effective vectors for disease, surely? The obvious explanation is logistical rather than epidemiological - who would look after those children? Wouldn't childcare duties take too many essential workers out of the workforce? Well, they order these things better in France, it seems, where facilities for those children to spend their days in isolated fun are even now being commissioned. Not sure how that's going to work out.

Yesterday, as expected and increasingly hoped for, the possibility of going to Japan was taken from my spotless hands by BA's cancelling the flight, which I think means I will get a full refund (and since I was paying for three people it was a tidy sum). But I'm in the very fortunate position of still having a job and wage, and being in a sector that has the possibility of moving largely online. There are millions of people without a safety net of any kind. That's why I do not blush to share another petition, this one calling for a Universal Basic Income for the duration of the crisis (and perhaps beyond?).

My great-great-aunt Annie Robina Butler (pictured) wrote numerous children's books, mostly (if not all) on religious and more specifically on missionary themes. I'd seen lists of her works relating to various places round the globe, but it was only the other day I thought to seek out her Stories About Japan (1888). To my surprise, a rather nice reprint was to be had for less than £3, so I ordered it. 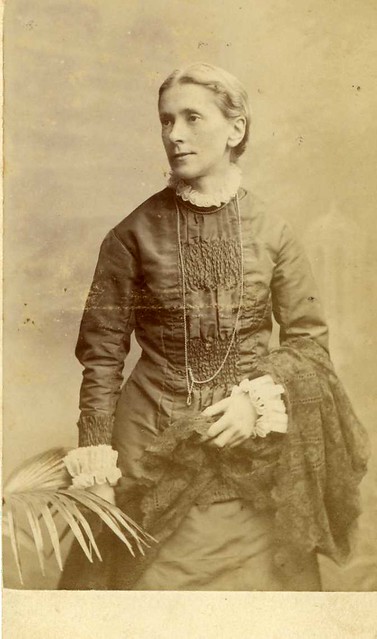 I've been reading a fair few books written around that time about Japan, and I find that Annie Robina uses quite a few of them in writing her own (she's quite candid about that). One important source is Isabella Bird's Unbeaten Tracks in Japan, which I've mentioned here before. Did Annie Robina know that just at the moment she was writing about Isabella Bird, Bird herself was in India with her little sister, Fannie Jane, and that together they were busy founding the John Bishop Memorial Hospital? She must have, surely? It seems too much of a coincidence.

No doubt I will end up writing about the way Annie Robina presents Japan to child readers when I come to write all this up in an academic context, but in the meantime let me share with you, via her, these illustrations from The Pilgrim's Progress, at that time recently translated into Japanese (in the late 1870s): 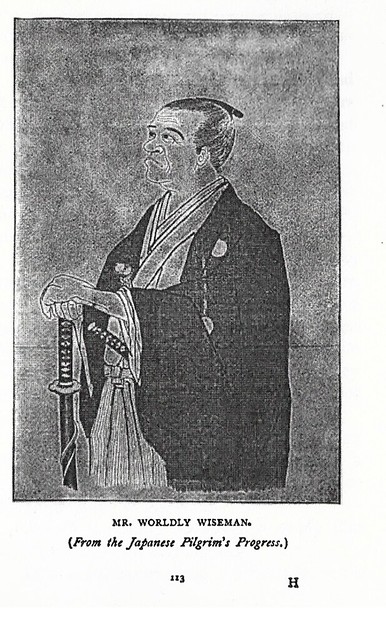 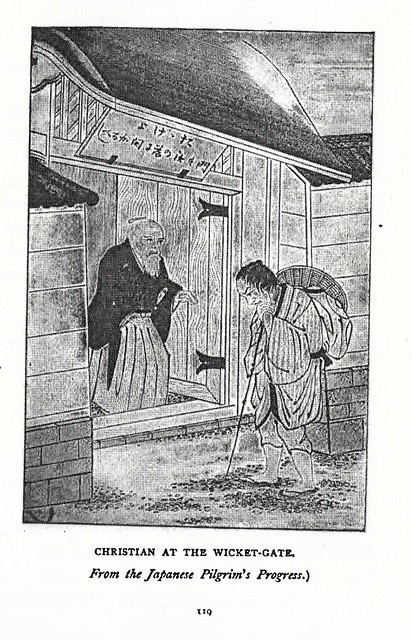 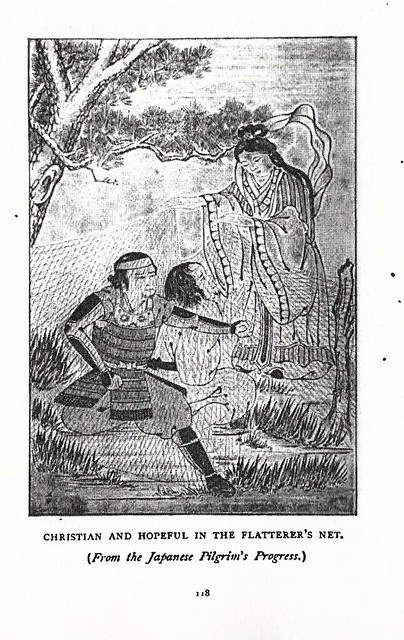 "The Japanese understand their meaning much better, and the book much more easily, than they would if the pictures were English," Annie Robina explains, adding: "Missionaries tell us that the people of Japan are getting to be just as fond of Bunyan's wonderful book as the people of England are."

I wonder if it's still much known in Japan? I must investigate.
Collapse