I watched the first day of the Osaka basho on television yesterday. It's being held behind closed doors because of you-know-what, which meant that it was possible to hear the rikishis' grunts and oofs all the more clearly. Happily Mitakeumi saw off Enho (the little scamp) with an uncompromising oshitaoshi. And so begins his long climb back to sekiwake and in time, who knows, ozeki? As a two-time yuushou winner, he (and his fans) should never give up hope.

Well, what else has been happening? I was in Brighton last weekend, celebrating my brother's 60th birthday with dim sum at his favourite restaurant, which was very pleasant. Here he is with his partner's niece's daughter: 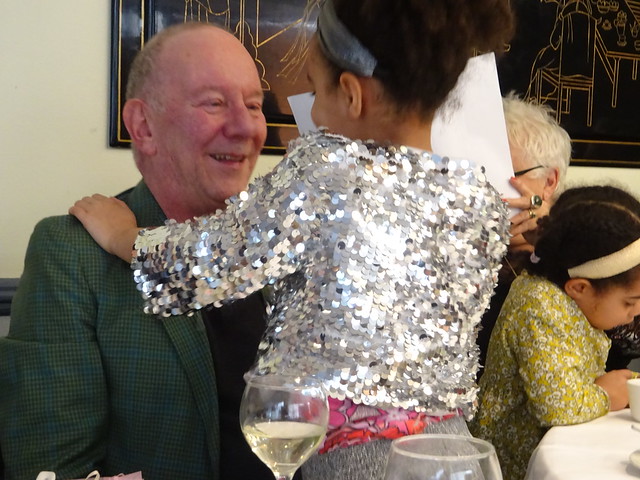 On the way back, I had this encounter, which I already posted on Facebook but put here because it amused me and I don't want it to be lost to the oubliette:

Two young women sat opposite me in the train. One was Chinese, the other British (or at least had lived here a long time, though I did occasionally catch a slight unidentifiable accent and there were some odd grammatical slips). They had clearly met recently and were getting to know each other. Their conversation was appealingly punctuated by questions such as, "And what exactly is the difference between 'cute' and 'adorable'?"

Anyway, at one point the Chinese woman said. "We have two calendars. One is the same as the Western calendar, but these days the other is only used by old people."

"Used to buy old people??" came the incredulous reply. (Truly, China is a very different culture, seemed to be the tonal subtext.)

At this point I couldn't stand it any longer, and had to carry out a grammar intervention. How long would *you* have lasted?

My friend Eriko stayed on Thursday, on her way from Glastonbury to Colmar (Bristol is of course a natural stopping point between the two). Will I see her next month in Kyoto? I'm in some doubt because of COVID 19, but as long as the FOC don't advise against travel to Japan I can't claim on my travel insurance. (And, since I paid for three tickets, it's a lot of money.) In any case, I'm not sure I see the argument against travelling from one place where the disease exists to another where it also exists. (At present Bristol has just one case, Kyoto 8 - though no doubt both figures will be considerably higher in a month). Wherever I am, you may be sure I'll be washing my hands at regular intervals, and since we've booked an AirBnB it's not even as if we'll be eating out all the time. But I suspect the decision will be taken out of my hands, spotless though they be.
Collapse