There's a nice John Finnemore sketch in which Pachelbel gets annoyed by people only ever wanting to hear his Canon and ignoring his more ambitious work. This is of course a common phenomenon. My brother, serious contemporary composer, is dogged by his setting of Roald Dahl's Dirty Beasts poems (initially narrated by the author himself), which has been performed and recorded far more than his other pieces. Richmal Crompton came to resent William Brown, Conan Doyle couldn't shake off Sherlock Holmes, and so on. Rather than be grateful for having had one more hit than most people, it's easy to focus on the fact that you are going to be remembered for something you don't consider your best work.

My father greatly took to a picture I drew at primary school, a portrait in pastels of six duckling chicks which had recently taking to wandering up our lawn. He framed it and hung it on the wall, perhaps as an earnest of things to come. Later, when I was a published novelist, he would still hark back to that picture in a way that clearly implied my creative output had been going downhill ever since. 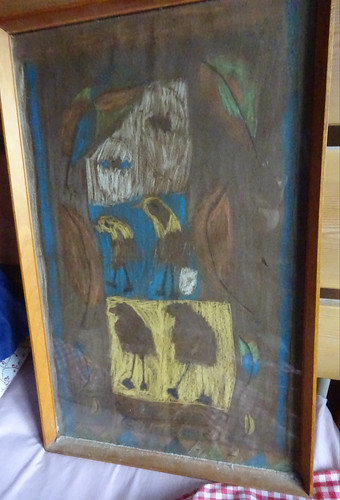 You are Not to Agree with Him

So anyway, I was looking at my Academia.edu page just now, and had a similar sensation. Not everything I've put up there is for download, but of those that are the top 3 are an eclectic mix, and don't necessarily represent anything like what I'd have predicted or think of as my best:

This 2013 casebook essay is far and away my most read piece. I think it's a pretty solid piece of work, but why so much more successful than the rest? I suppose it got on some reading lists.

2. ‘“You are feeling very sleepy…”: hypnosis, enchantment and mind-control in children’s fiction’ 1,435 views.

This is a surprise entry - from an article published in 2005 (and written three years earlier). It doesn't connect to any of my main research themes, but it's an original piece. I once saw it recommended on a page written by a hypnotist, which I found flattering - perhaps it's mostly hypnotists who download it?

3. ‘Experimental Girls: Feminist and Transgender Discourses in Bill’s New Frock and Marvin Redpost: Is He a Girl?’ - 530 views

This 2009 article is to date my only publication on gender stuff, and has done pretty well in download terms - I assume for the theme rather than because the world is awash with Fine or Sachar researchers.

Contrarwise, the lowest scoring piece is the only one that ever actually won an award: ‘Alan Garner’s Red Shift and the Shifting Ballad of “Tam Lin”’ was ChLA Honor Article in 2002, and is about one of the authors on whom my critical reputation rests. It has 47 views.