Possibly no one before me has hit on the notion of taking photographs of Stonehenge. Well, today you are in for a treat! But what's the best way of seeing it? All moody in the lowering clouds? 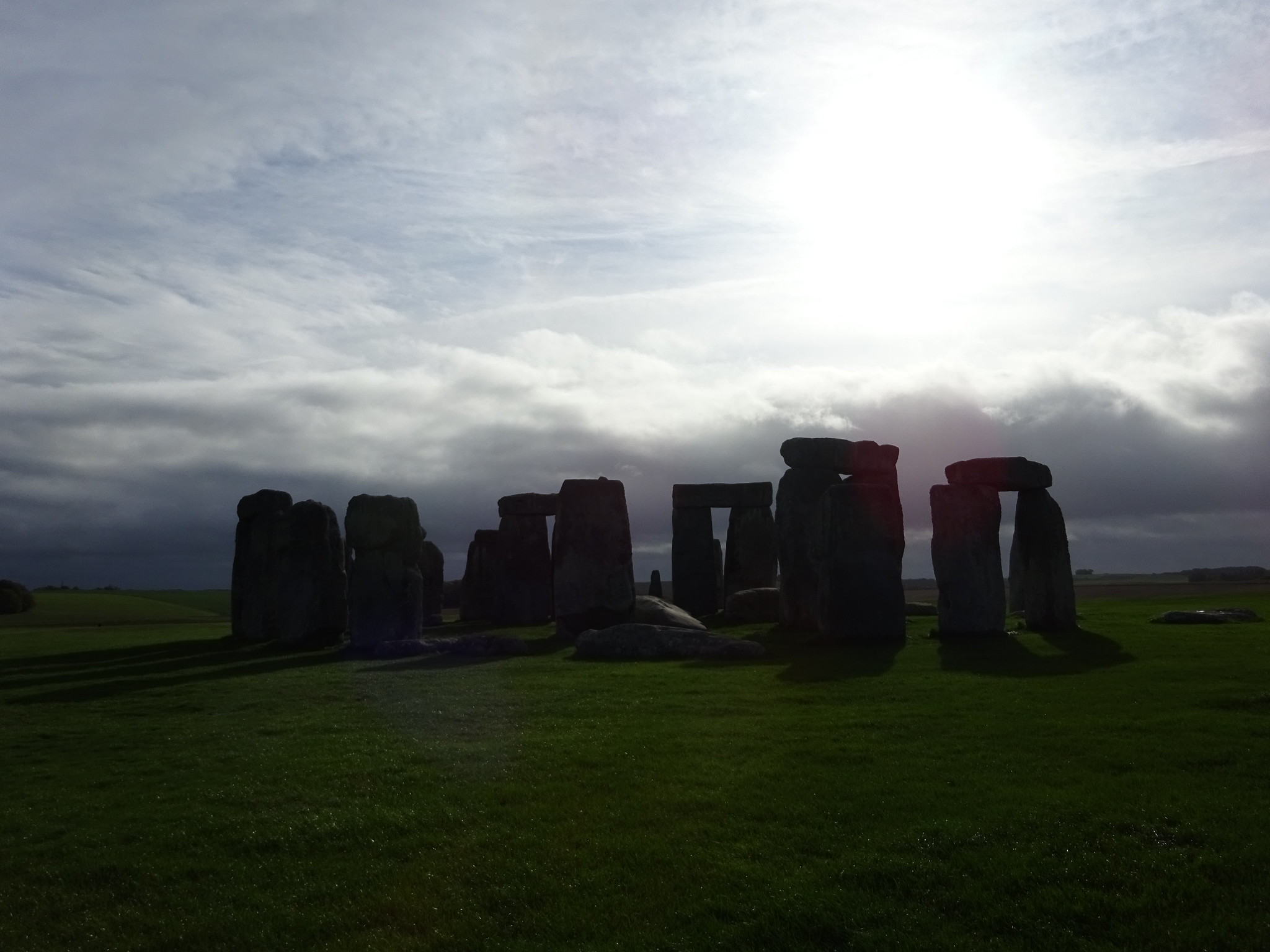 Or with the stones' bright shadows telling the hours like so many gnomic gnomons? 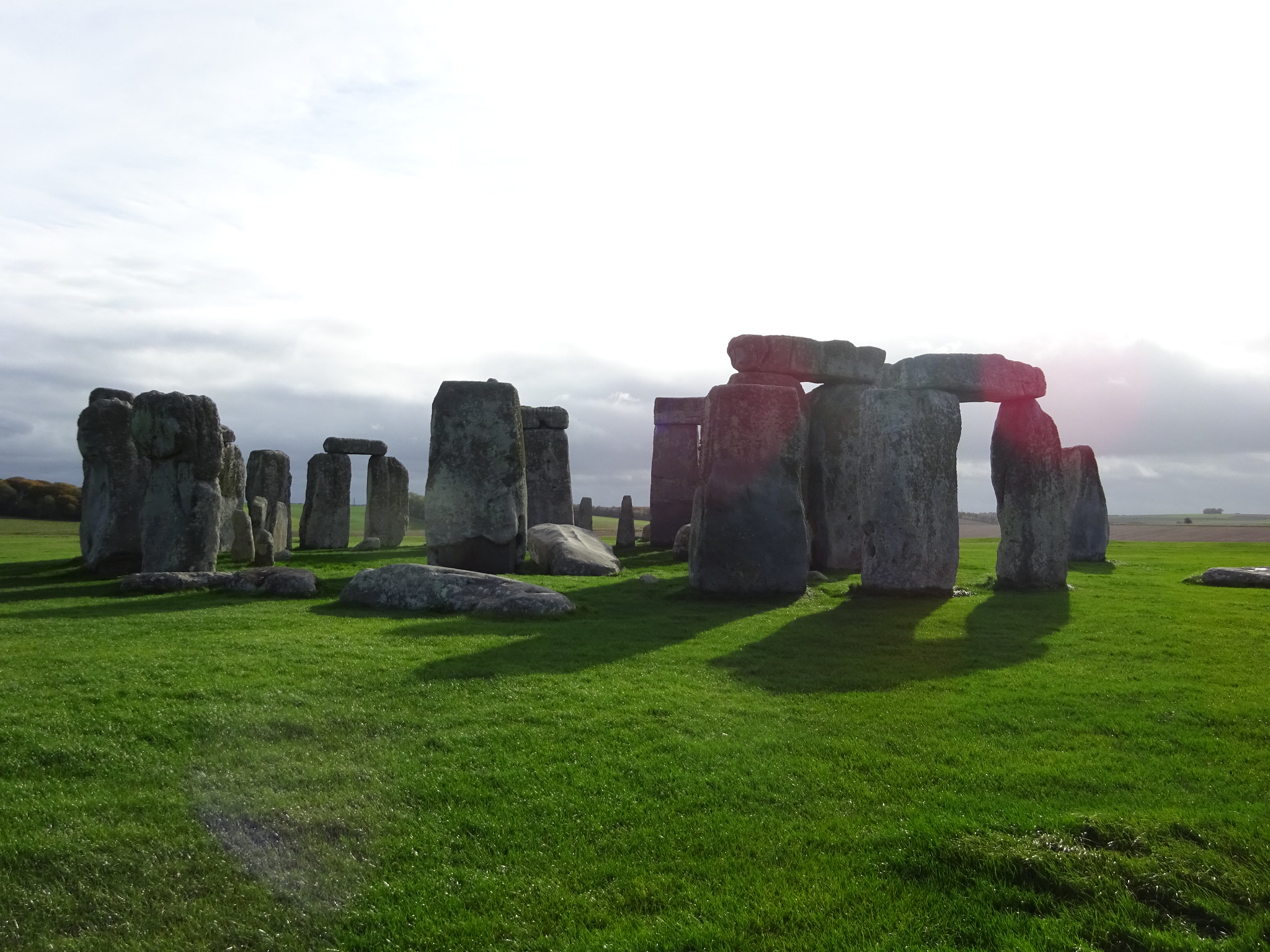 Or in close up, now with added crow and some heel stone groupies off to the left? 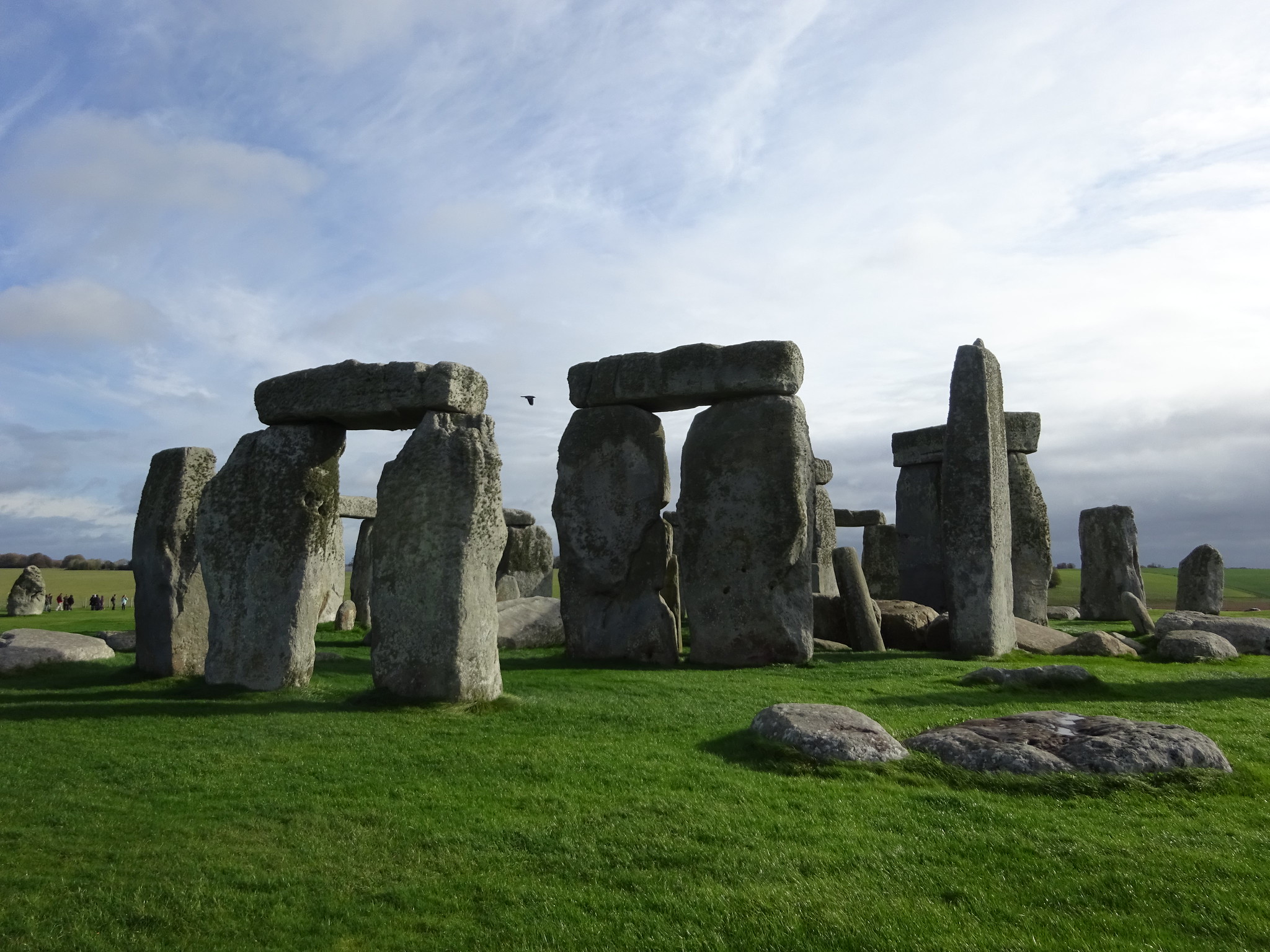 Or, finally, with Ness coming back to survey the scene of former triumphs in Nintendo's game Earthbound (or so I was informed by my companion)? 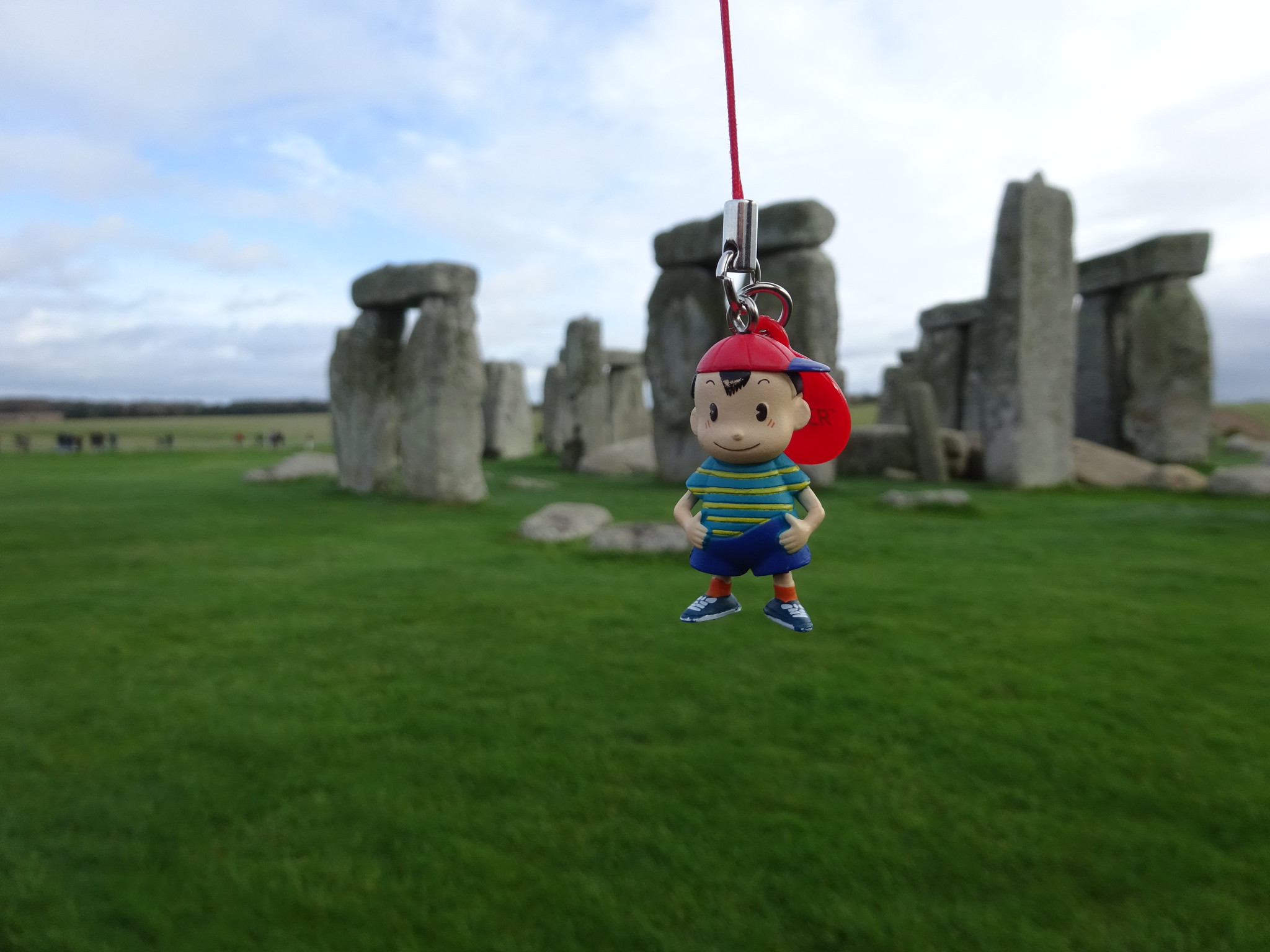 The forecast for yesterday was strong winds and heavy rain, and so indeed it proved, but there were also moments of relief, as you can see, and my second expedition with Moe, this time to Wiltshire (the first, to Somerset, being recorded here), was a lot of fun, scary floods at the bottoms of valleys notwithstanding. It's become our established pattern to do far too much in one day, and yesterday we covered Stonehenge, Avebury and Lacock (village and Abbey). I'd not been to Stonehenge since they built the visitor centre and grubbed up the road that used to branch past it from the A303 - although I often see the monument itself from said A303, going back and forth to my mother's house. In fact, I think my last proper visit was in around 1982, and rather disappointing it was, with the stones being set (as I remember it) quite a way off from the makeshift fence. At that time, though, I was still probably griping about not being able to walk among them as I had in my childhood. The new set up is actually pretty good, with a little shuttle bus taking visitors the half mile or so between centre and stones. Of course you can walk in the rain if you like, and some did.

But still, I will always prefer Avebury, I think, trilithons notwithstanding, because you can get up close and personal, and put your feet on the Devil's chair. It's really become as Wicca-ish as (and rather more Druidic than) Glastonbury in the last generation, which may irritate some, but not me. 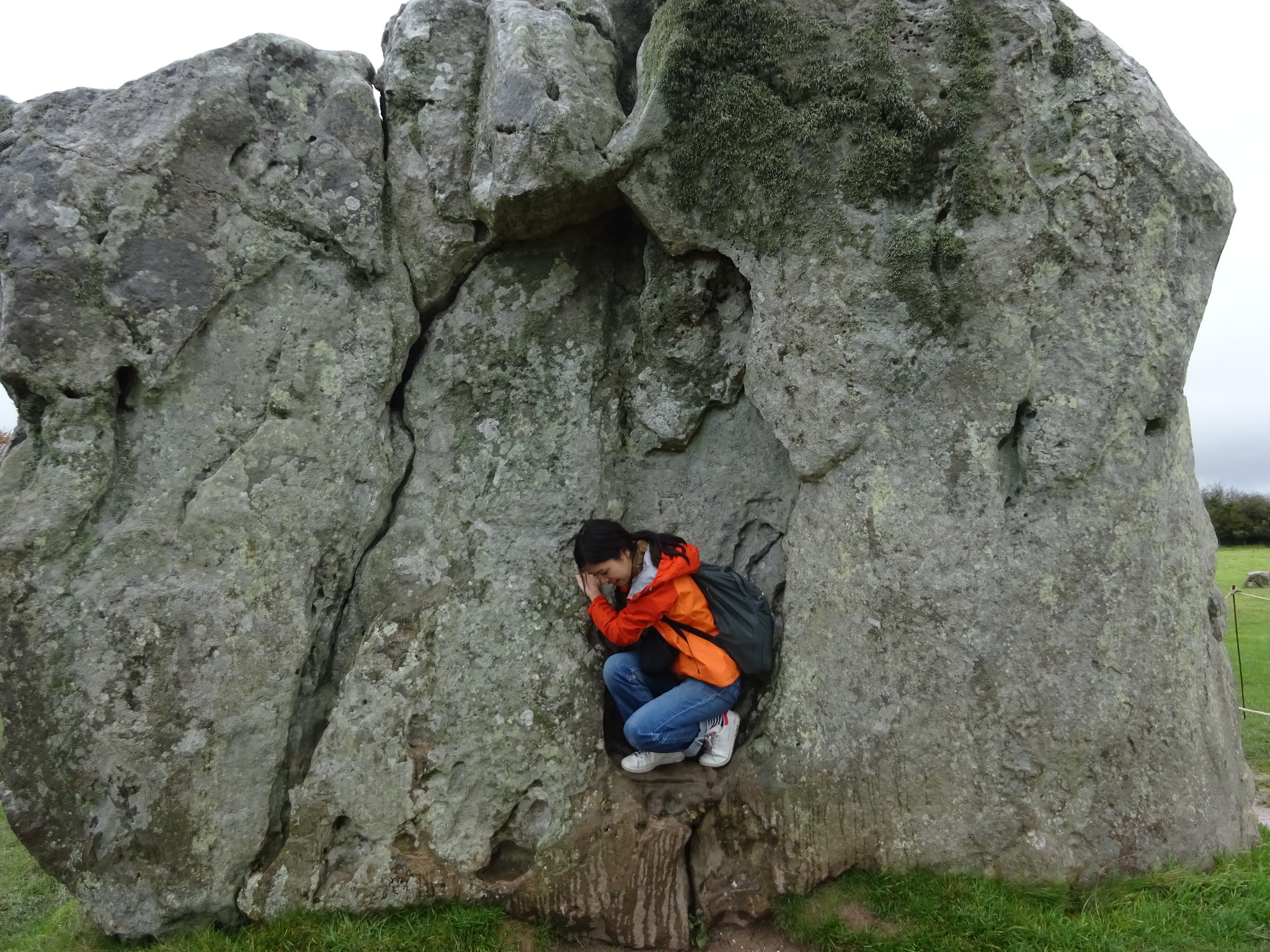 We were in Lacock for Harry Potter-related reasons, but did take time to see the window from which in 1835 Henry Fox Talbot took the first photographic negative, kick-starting modern photography. Which was kind of cool.

There were soggy sheep everywhere yesterday. In a field of about a hundred just beside Lacock Abbey, not one was moving and I wondered whether they might even be ornament, not living animals. Then one did, but rather than infer that they must all be alive, my immediate thought was that this was the only animate sheep in a field of sheep statues, and that it must be seriously weirded out.

In fact, however, the only weird one was myself.
Collapse