I've been in Valencia for a few days attending a conference, most of which was in Spanish and thus incomprehensible to me, but everyone was extremely friendly and welcoming, and somehow that didn't matter too much. Why was I there at all, you ask, since I couldn't understand the proceedings? Why, because I had been invited. My keynote went well, thank you very much.

While in Valencia I read Isabella Bird's book about travelling in Japan in the 1870s, and found it very interesting, as an outsider's account of a country in transition from Edo culture to Westernisation. It's full of quotable titbits, but I shall refrain, at least for now. One interesting factoid, though: did you know that the only currency accepted in Japan apart from the yen at that time was the Mexican dollar?

Bird - who already had experience of adventuring in Hawaii and the Rockies before this - was in her mid-forties when she decided to travel the length of Japan (well, from Tokyo to Hokkaido), and she certainly knew her own mind. She isn't afraid of criticising the country: the flea-infested tatami, the food, the abominable roads, etc. On the other hand, this lends her compliments more force, so that when she praises the kindness and courtesy of the Japanese, their immaculate roads and fields, the beauty of the landscape, and so on, we can be confident she means it. Her relationship with her young interpreter, Ito, is also fascinating, if glimpsed only briefly in odd exchanges.

Of course, it turns out that the book has been made into a manga - [不思議の国のバード] (Bird in Wonderland). The Japanese like to look at people looking at them, and of course I like looking at the Japanese doing that, too, especially when refracted through a British children's classic. The allusion to Alice (recalling to me D. C. Angus's The Eastern Wonderland: or Pictures of Japanese Life, which was published at almost the same time as Bird's book, in the early 1880s), only adds to the allure.

Bird in the manga is much younger looking than the real woman, but otherwise it's a fairly faithful adaptation, from what I've seen, but that's only on the basis of a few pages.

How did they handle the fact that Bird, who did not speak Japanese, must speak Japanese in the manga to be understood by its readers? Why, like this: 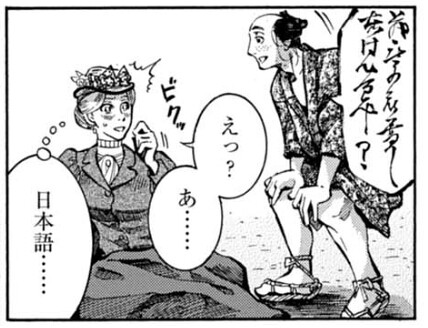 This is actually quite an accurate representation of my arrival in Valencia.
Collapse