I began this tale of adventure in the (for me) unlikely context of seeing an advert for the Rugby World Cup, so there is a pleasing roundness to the fact that for the last two nights of my stay in Japan I was staying next to the National Stadium, in a sports hotel where rugby fever, if not yet overflowing, was nicely on the simmer. More immediately, from the restaurant I had an excellent view of a professional baseball ground, and watched a few innings of the game between the home team, the Yakult Swallows (really!) and Osaka’s Hanshin Tigers. Fun fact: the stadium is owned by Meiji Jingu Shrine. 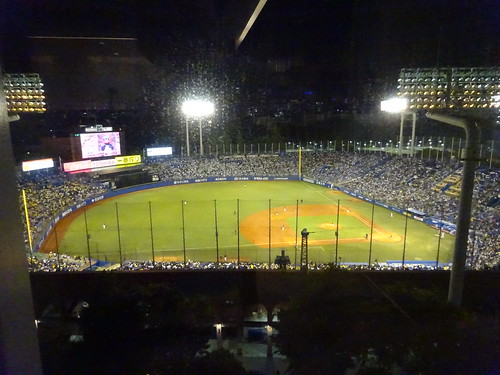 Not that I really understood what I was seeing, but there was a large and enthusiastic crowd, and altogether it looked much like the only other game I’ve been to, at Yankee Stadium in 1986.

I often regret that Japan took to baseball rather than Test cricket, the subtlety and meandering indirection of which would have suited Japanese culture well. What other game has tea breaks written into its laws? Ashis Nandy's famous declaration that “Cricket is an Indian game accidentally discovered by the English” might have applied to Japan just as well. But, shou ga nai. And there’s no doubt that the baseball bug bit hard and deep in the Japanese psyche. For a long time I assumed it was a post-War phenomenon, but not at all - although during the war itself, they tried to Japanise the terminology, only for it to largely revert to English later. (I wonder if "yakyuu" [baseball] dates from that time, or earlier?)

My last day saw me meet up variously with Hiroko, Yoshiko and Mihoko, once again - including a visit to Kameido Tenjin shrine - dedicated to the same kami-cum-exiled scholar whose main shrine I visited three years ago in Dazaifu, and hence popular with those seeking success in exams. It seemed an appropriate segue back into the world of the university... but also another chance to view wisteria, which I did in the company of Hiroko, some turtles and a coincidental heron. 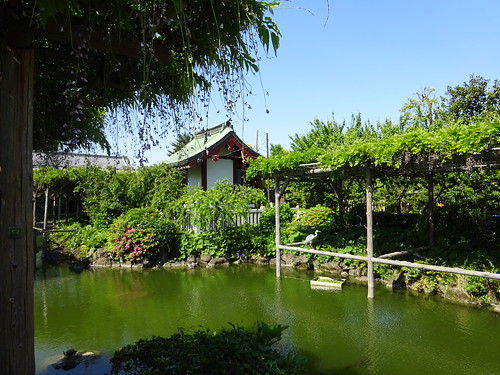 I've mentioned the beginning of the reiwa era a few times here, I think. I've been making a bit of a reiwa collection, in fact, the transition from living emperor to living emperor being a unique event in modern Japanese history. It's not just a matter of the change of individuals, of course; the eras they represent are far more firmly embedded in everyday consciousness in Japan than here, and have their own names distinct from the emperor's personal name (which is never used). I think there was something of a fad for talking about the "new Elizabethans" back in the early '50s when it had novelty value, but who does that now? Or uses regnal years? In Japan, however, the era name and year are visible in all kinds of official and formal documents, from wedding invitations to driving licences. Psychologically and culturally, it's a bigger deal. (That said, of course, I've never experienced an era change in the UK - and nor has anyone else under 67.)

In this context, I thought it would be interesting to see how it was marked, so I made a point of photographing the change's more ephemeral manifestations as opportunity presented. Many of these are commercial: it's not surprising that people decided to make a quick yen or two selling Heisei air, for example. But not all.

I'll leave Japan with one more piece of uplifting Japanglish. Would you buy socks with this slogan? "JamgardEn. The original point of our brand concept is 'Jam our worldwide view and element of femininity into one Garden.'" 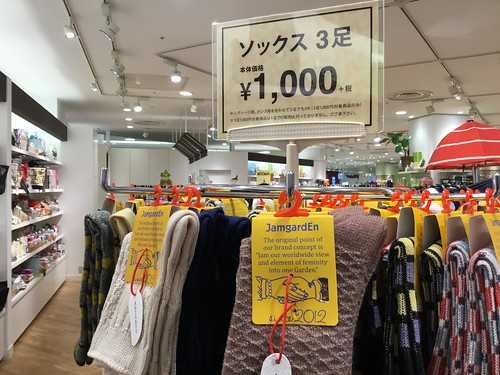 The flight back was uneventful, if very long. I finished Killing Eve, and was glad to see they didn't go down the Fiona Shaw villain route, though they teased it. I watched and cried three times (one less than the strapline promised) at "コーヒーが冷めないうちに" (Before the Coffee Gets Cold), a bittersweet time-slip story of a kind they are very fond of in Japan. It was only when I got a cab from Bristol bus station that I realised I was back in the UK. My Eritrean driver asked me in a friendly way about my trip, and we compared the low crime rates of Japan and Eritrea (contrasted favourably with Uganda by my driver - sorry, Haawa). At the end, though, he opined that, although the honesty and hard work of the Japanese were admirable, these would avail them nothing because they were not followers of the One True God. Then I saw the crucifix swinging from his rear-view mirror. I wanted to say, "At least Buddhists and followers of Shinto don't kill each other." But I was too tired.

I was thinking it hard, though.
Collapse