My cousin Vicky (daughter of my mother’s elder sister) visited my mother yesterday when I was there, and in telling of some cute thing that her granddaughter had said, inadvertently revealed that the girl addresses her as “Flo(w)”. The reason, apparently, is that her daughter-in-law’s parents had already bagged the titles “Gran” and “Grandad”, and they had to find an alternative. “What about Nain and Taid?” Vicky suggested, these being the Welsh equivalents. Her husband, however, who is very English, complained, “Taid? She may as well call us Ebb and Flow!” And so it was decided.

I suppose this must be a common problem, and potentially a tricky diplomatic one. Vicky seemed to believe that the mother's parents always (and rightly) had first dibsies, but is that a widespread convention? There was no such competition in the case of my own grandparents: they were Nana and Grandpa on my mother's side, but my paternal grandmother died before I was born, and my grandfather on that side preferred to be addressed in Esperanto, as "Avo". (To be honest I thought that was his name until years after he died.) The conventions for my own children's grandparents were dull enough, but evenhanded: Grandpa/ma + First Name. It seemed to work.

Vicky is always stylish, and on this occasion was wearing a very nice Alexander McQueen cardigan. When my mother admired it, she gave it her - and I think it suits her well. 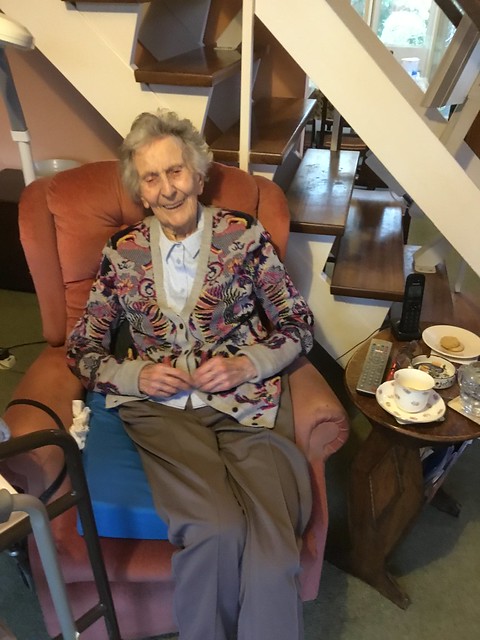 My mother turned 94 the other day.
Collapse