In the unlikely event that you've been asking yourself "Where's Steepholm?" over the last couple of days, the correct answer was "Valencia". I was part of a jury for a public doctoral defence - the first such procedure I've ever taken part in. (UK-style vivas are quite a different and more private thing, though not necessarily less tense.) Very interesting it was too, though since it's not my story to tell, I'll leave it at that, except to say that the defence was successful, and everybody was happy at the end of it. Unless of course the candidate had some secret enemies in the room, but if so they had the discretion to hide their chagrin.

It was a bit of a harsh trip, logistically. I had to catch a bus from Bristol to Gatwick at 2.25am on Friday, fly to Spain, and then preside over the defence in the afternoon. The following day I asked for an evening flight home so that I could take some time to look at the city, but that meant (thanks to some French air-traffic-control shenanigans) that my flight was delayed, I missed the last bus back to Bristol, and had to spend five hours in the early hours of Sunday at Gatwick, before catching the 5.40am home. It's now Sunday evening, and I've not had a lot of sleep.

Given that, here are some illustrated highlights of my trip, rather than a connected narrative. Some of the facts here come via the doctoral candidate, Catalina, who has also worked as a tour guide in Valencia, and kindly gave me and the other examiner a city tour yesterday. 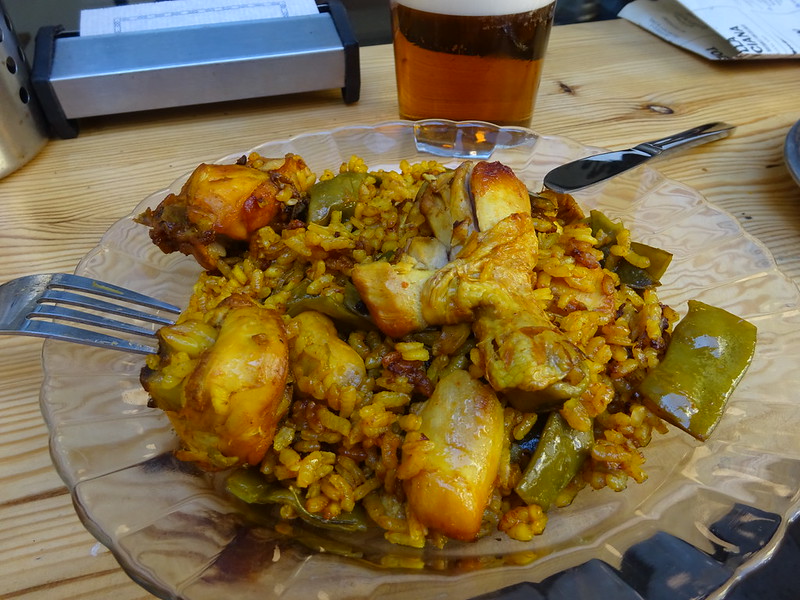 First, paella. Almost the only thing I knew about Valencia was that it's the home of paella. In many places paella is made with seafood, but the traditional ingredients in its home town are, it turns out, chicken and rabbit, with snails and the local water rat as optional extras (mine had neither, sadly, but it was still delicious). Valencians never eat paella in the evening - it's strictly a lunch dish.

That was lunch yesterday: Friday evening was a rather opulent, multi-course affair, which was all delicious (though since I was among strangers I resisted the urge to photograph it). I think the strangest single dish contained the following elements, all of which had equal billing: pork snout, salmon roe, artichokes and parmesan cheese. It tasted nice (especially the artichokes), but in what fevered pipe dream did anyone come up with that combination?

Valencia is a Spanish city built in (or around) a Moorish city, built on a Visigothic city, built on a Roman city. I love places like that, and have done ever since I lived in York, which is similarly palimpsestuous. Here, for example, is the medieval "mountain gate", outside which barbers used to have their stalls, ready to shave any shaggy mountaineer coming to the big city for trade or talk: 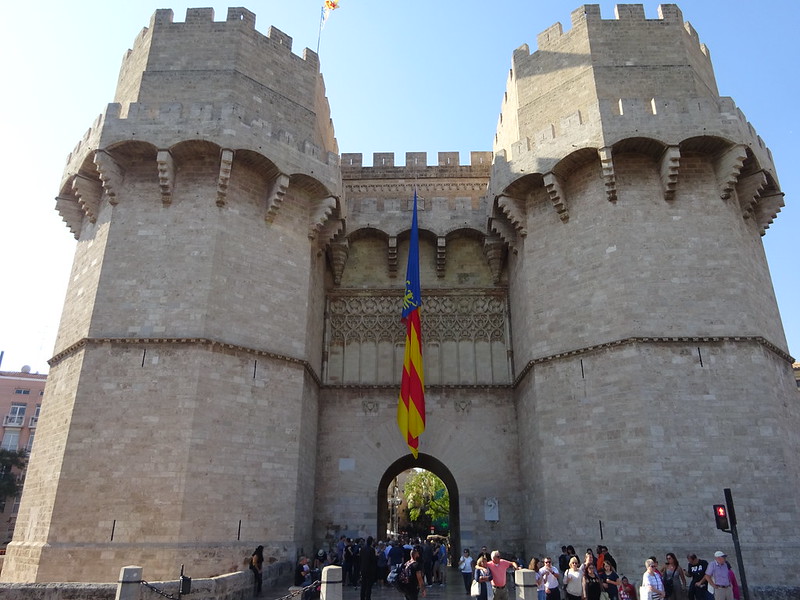 Impressive, isn't it? But just a few yards inside, built into existing houses and shops, much of the Moorish city wall still remains. The Valencians are a practical people. Here are a couple of Moorish towers, about a thousand years old apiece, just being parts of people's houses, down back streets and beside little car parks: 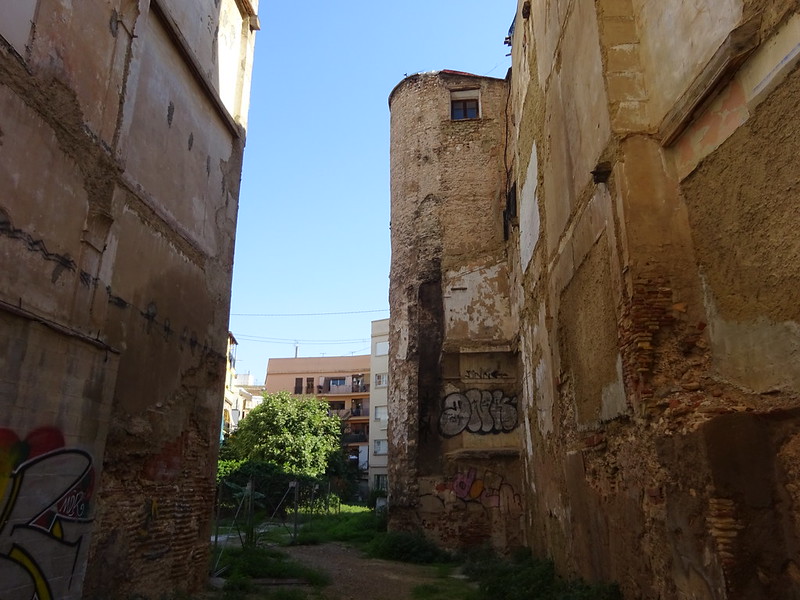 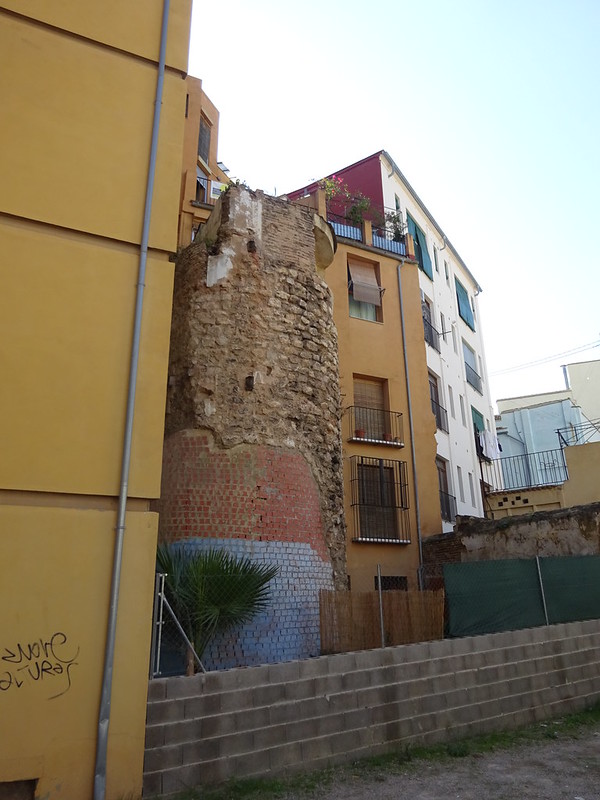 The Moors themselves were far from averse to a bit of bricolage. Witness this walled-in arch, featuring bits of saints from a Visigothic church: 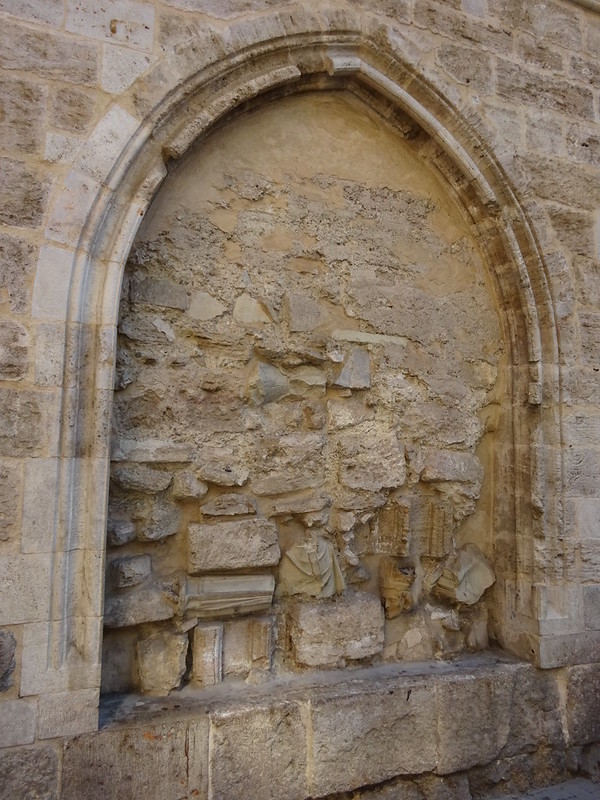 In the more on-show parts of the city, there's a good deal of Catholic bling, especially here in the church of St Nicolas: 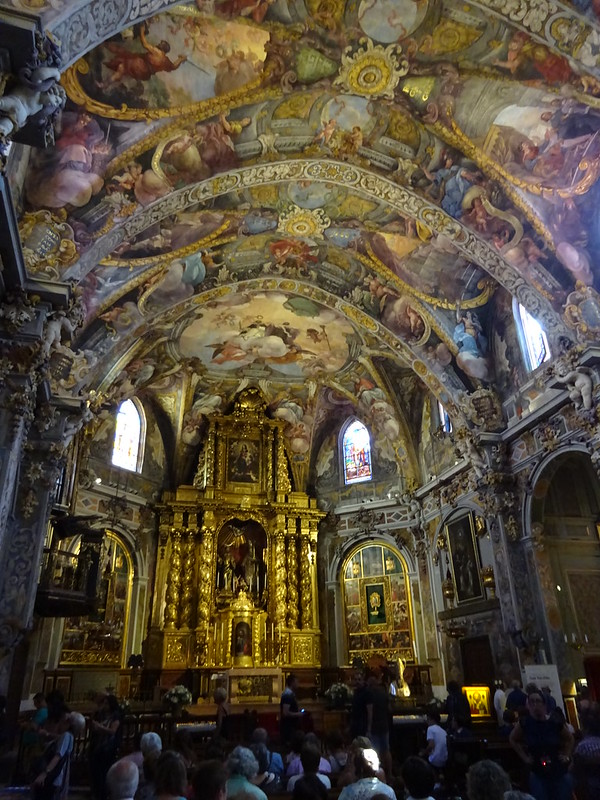 Even St Raphael seems to be bragging about how much bigger his fish was: 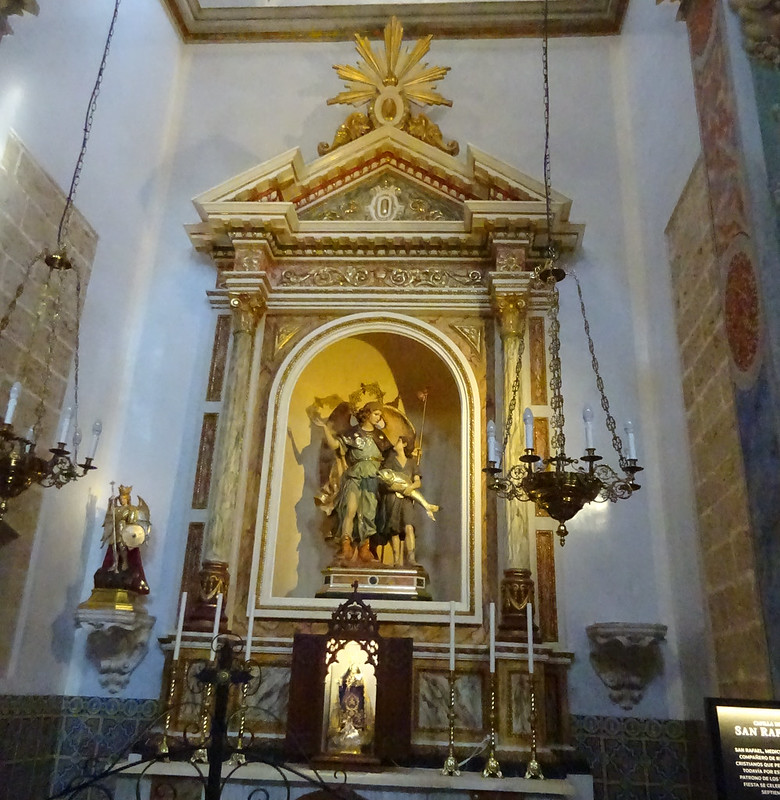 More impressive to me (of the austere tastes) is this market hall, once home to traders in the silk that was for centuries Valencia's main commodity (before competition and disease in the mulberry trees made them turn instead to oranges). Each skeined pillar twists toward the heavens: 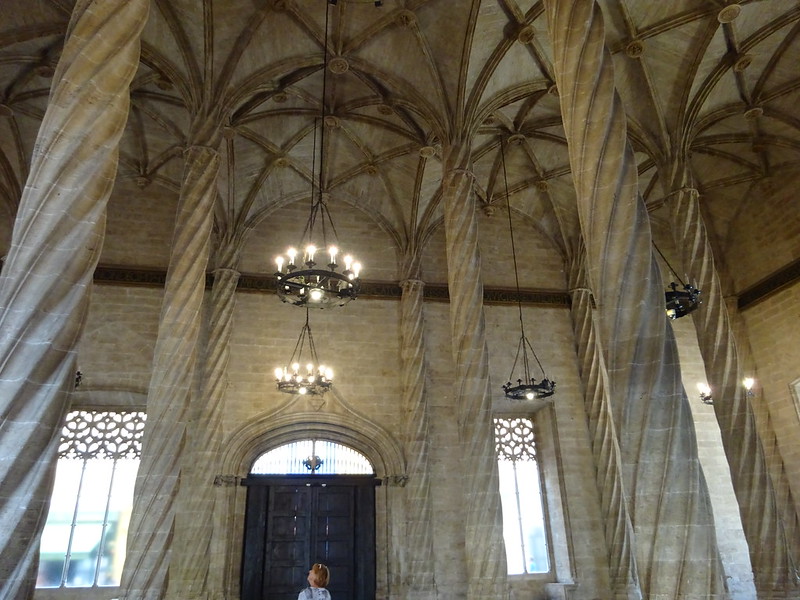 But besides the old Valencia, there's an ultra-modern Valencia, built by modern architects and sculptors. Here is a scene from circa 2100, near my hotel: 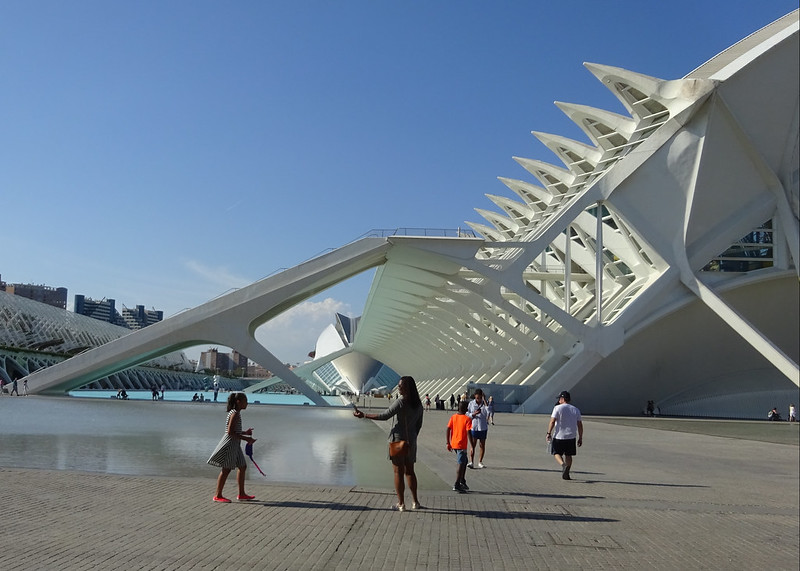 There's some controversy in the city as to whether such expensive projects should be indulged in, when the old town needs so much support, and the country's on its uppers. As to that, I stay loftily neutral; but I'll be going back next year, Brexit sakoku notwithstanding, to look round Valencia again!
Collapse