Over the last week I've been visited by my friend Eriko Kawanashi, the anthropologist who has made a study of the beliefs and rituals of Glastonbury. We had a lot of fun, which I won't detail here (my proud boast is that, over the two days she was with me, I converted her to Marmite), but I was struck by her mentioning that, having learned a lot of her English in Glastonbury, she didn't realise the extent to which it departed from normal usage. Thus, she had been given to saying things like "I feel as if my chakras need cleansing today" to English people elsewhere, and being bemused by the looks they gave her.

Tangentially, two days ago in Athens (where I was attending the IBBY conference) I chatted with an Italian teacher of Japanese and some of my Japanese friends. It was noticeable that, although her Japanese was really excellent, she continued to gesture with her hands as if she were speaking Italian. It was strange how incongruous this looked, at least to undemonstrative me.

Anyway, Athens was a lot of fun, even though I didn't get a chance to do any sightseeing at all. The Acropolis remains unvisited. On the other hand, I heard a lot of interesting papers, gave one that went pretty well, and met some old friends, including Ali Baker and the Tokyo Joshidai Crew, Mihoko, Satomi and Mikako. By the way, here's me hangin' out with Eiko Kadono, the author of Kiki's Delivery Service (魔女の宅急便) and winner of this year's Hans Christian Andersen award, which was given her at the conference dinner, where she gave a really excellent speech. That's two Ghibli-fied authors I've met. Are there any others still alive? 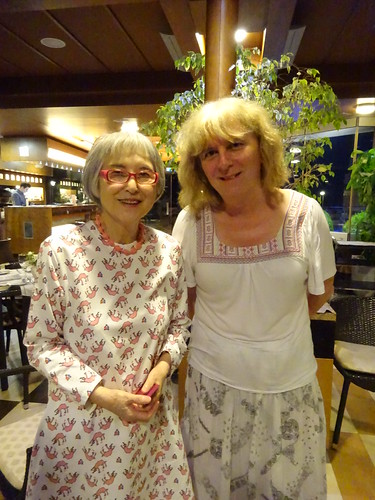 Remember these lines from the theme song to Cheers?

Or perhaps it was actually:

The weird thing is that they both work as feel-good messages - either about our shared humanity, or our individual uniqueness. I guess there's no real opposition there, but it still feels kind of odd that they both make sense when they appear to contradict each other. And I still don't know which version is correct.
Collapse