If the English-speaking world has An Archive of Our Own, Japanese has its equivalent, known as 小説家になろう ("I Want to be a Novelist"). It's not so fan-fiction centred, but otherwise the format seems similar: you can upload stories or longer work, and read and rate that of other people. As with English-language fanfic, stories are sometimes taken up by "real" publishers and made into light novels, manga or anime, and my impression (feel free to correct it) is that there isn't the same stigma attached to work of this kind that there is in the English literary sphere. In fact, according to Wikipedia there's at least one imprint that specifically focuses on publishing work that first appeared on the site.

Well anyway, for interest I looked at the genre classifications on the site, to see how they compared with those in the English-speaking world: 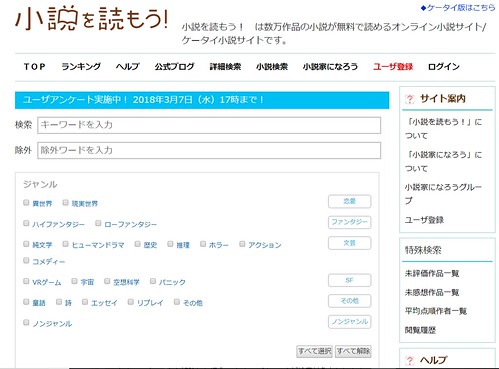 The genres are quite similar to the ones in use in English (and borrow many English terms, e.g. low and high fantasy, which are just as ambiguous in Japanese). If you're wondering, "Panic" appears to include various kinds of disaster, from zombie apocalypses to Godzilla to plane crashes. "Inference" appears to cover mystery/detective fiction.

The one I still haven't got my head round is "Replay", which seems to have something to do with writing that emerges from the playing of an RPG game or similar. Does that term exist in English too? If so, what does it mean?
Collapse