I write this post (or at least, begin it) in Aberystwyth, where I have come to examine a PhD. I will have to turn to PhD-examining matters shortly, so may have to finish this later, but wanted to share a couple of photos of Brockhampton Church near Hereford, which I visited yesterday en route to West Wales. It's all part of the Cotswold Project of course, even though Brockhampton isn't in the Cotswolds, for this is the church that some years ago was (for a small consideration) replicated by a Japanese hotel chain on the 20th floor of an Osaka hotel. (I will, naturally, be visiting the replica in May.) And, on that hotel's website, the church is kinda sorta implied to be in the Cotswolds, by way of a William Morris quotation that was I believe actually about the village of Bibury rather than the churches of the Cotswolds, but hey:

This authentic looking chapel is surrounded by green grass and vivid flowers and illuminated from above by the extensive glass roof. The design imitates the churches of the Cotswolds, described by the renowned designer William Morris as the most beautiful in England. Our chapel recreated the beauty of the Cotswolds, from its rolling green hills to its traditional arts and crafts culture.

Here's a promotional video showing how the replica is used as part of the Osaka hotel's wedding package:

The real church (I use the word with Baudrillard-esque knowingness), though it looks mediaeval, was actually consecrated only in 1902. It's the work of William Lethaby, an Arts-and-Crafts-inspired architect. Of course, it quotes lavishly from many earlier country churches, with its thatched roof, wooden tower and so on, so you might argue that it's no less "fake" than the one in Osaka, but either way the overall effect is beautiful, and Pevsner was rightly complimentary about it. 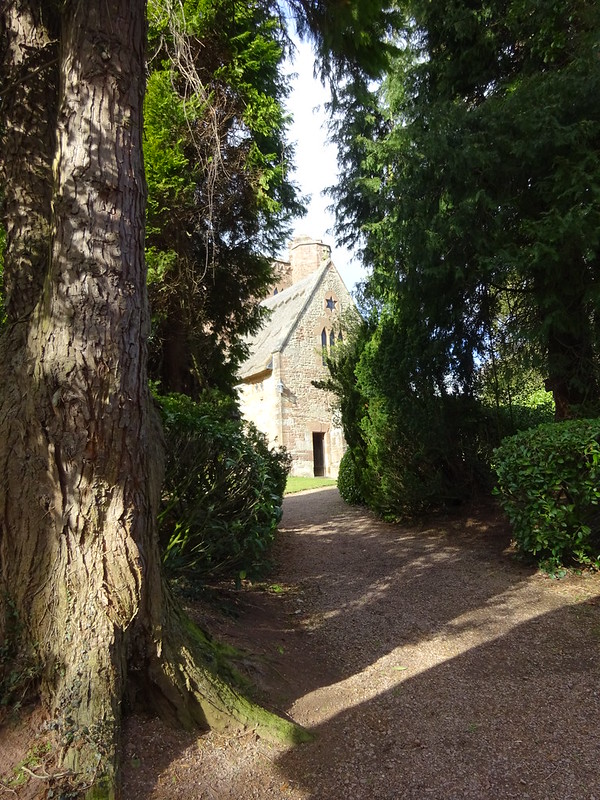 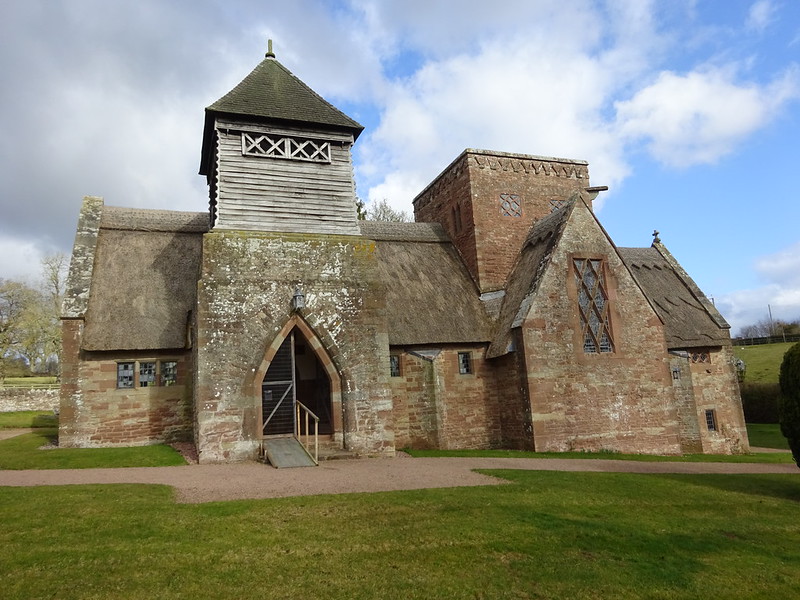 The view from the church is a little different from the one in Osaka, too: 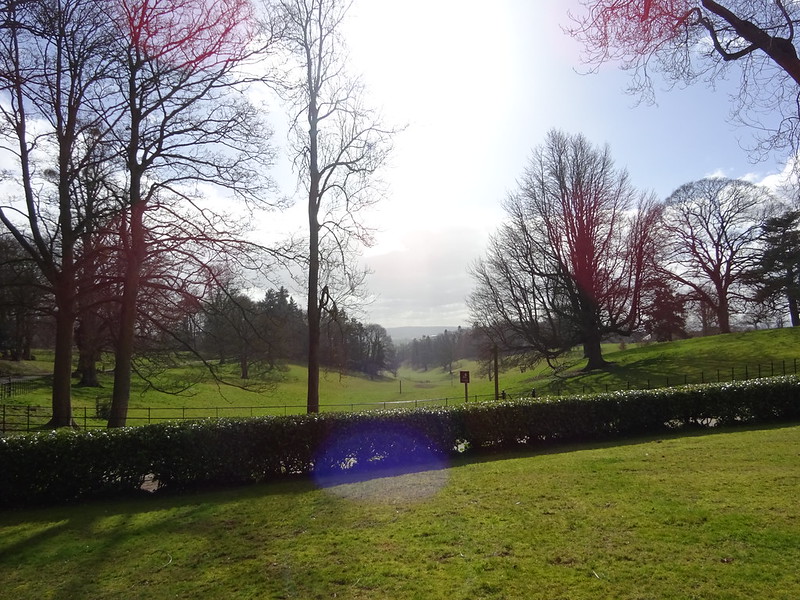 The churchwarden, Brigadier Rodney Watkins, was kind enough to show me around inside and to give me some of the history of the place. I won't go into that here, but have a couple of tapestries made by the William Morris workshops, after Burne-Jones: 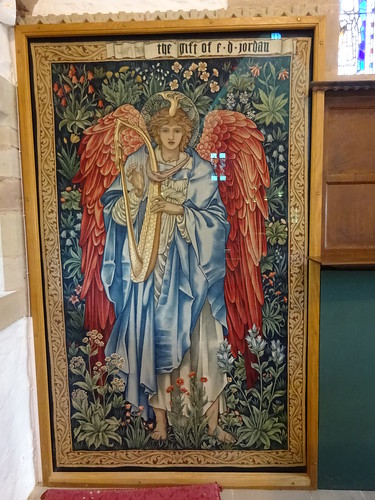 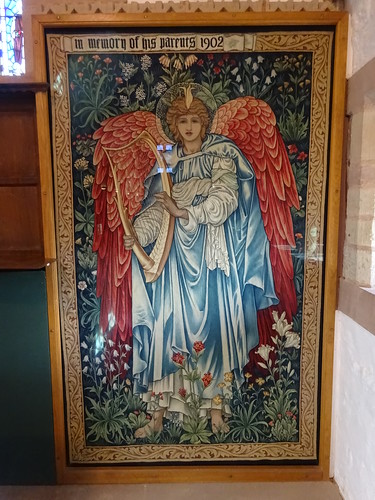 Amongst everything else, Brig. Watkins told me a story (possibly apocryphal but probably not) about a Japanese couple who were spotted drawing up to the church in a car. They got out, slipped into wedding gear, took a photograph of themselves in front of the church, then disappeared again. Can we doubt that they had been married in 20 floors up Osaka, and had come to the fountainhead to put the mother church's imprimatur on their union?

Then I set my sights to the west, and headed for Aber along the A44 - a really marvellous journey. It was late afternoon by then, and the winter light was slanted in that way that makes everything vivid and magical. Murmurations of starlings streamed from one side of the road to the other more than once at the level of my car, and sheep of preternatural whiteness strewed the hills. I was gurgling with delight, my joy mitigated only by the consciousness that such a wretch as I little deserved to witness such beauty, but what are you going to do?

Of course I can't show you any of that since I was driving, so you'll have to take my word for it, but if you enjoyed my pictures of honey-stoned Castle Combe the other week, perhaps you'll like half-timbered Eardisland by way of contrast, a small but worthwhile diversion from my westward road: 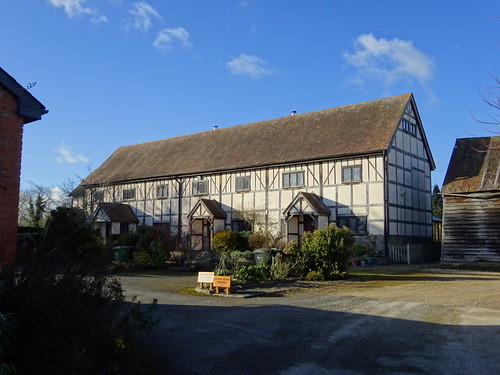 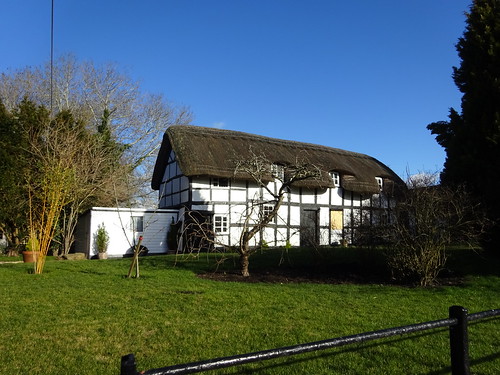 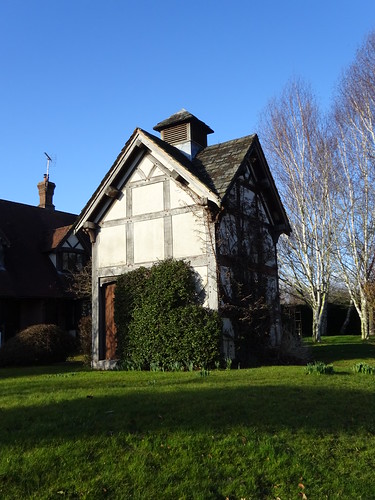 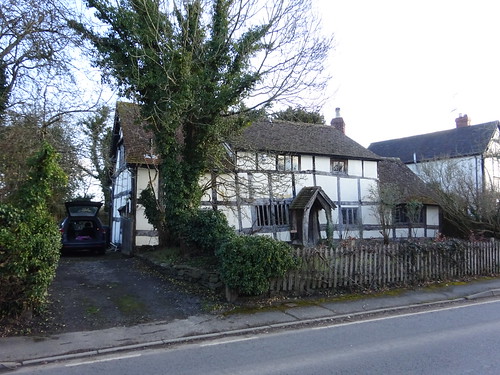 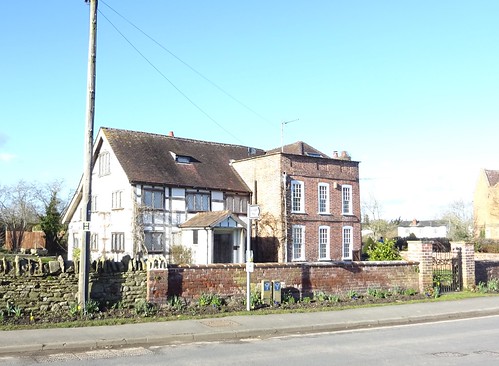 At last, the sea, the sea by sundown. 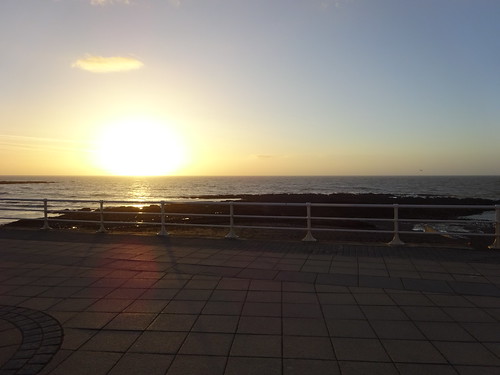