It's not often I go to the cinema twice in a week, but this week I did - first, to Three Billboards Outside Ebbing, Missouri (which I wanted to see because I'd enjoyed Seven Psychopaths), and today to Japanese Girls Never Die (in Japanese, アズミ・ハルコは行方不明 or Haruko Azumi is Missing).

Walking through Stokes Croft to get to the cinema, I saw this piece of graffiti alluding to the first film - and, since the second is in part about graffiti, it formed a nice visual handshake: 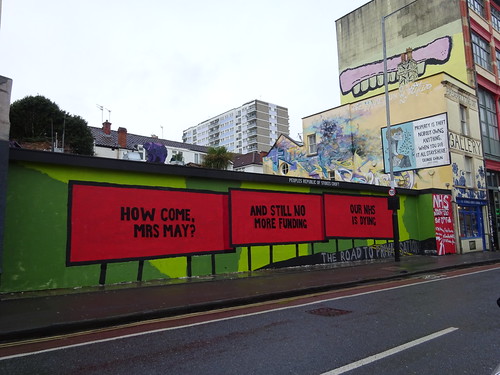 I liked them both. Billboards was certainly the more polished of the two, and the characters were more complex (albeit working with familiar templates). Japanese Girls was less predictable, more exciting and risky, perhaps precisely because it felt as if it was slightly less safe in the director's hands. Both had a kind of small-town-where-everyone-knows-everyone-and-secrets-have-a-short-shelflife vibe, black humour and strangely incompetent police. The Japanese film was making a fairly explicit political statement (for Japan) about gender inequality. I'm not sure whether Billboards was making any kind of statement, other than a plea for human understanding. And that's fine; I was glad to see both.
Collapse