Ever since Corbyn was first elected leader, I've heard a lot from the right wing of the party (and thence the media) about the threat of deselection of sitting MPs. It hasn't actually happened, though - to anyone. Whereas there has been a very messy attempt to "deselect" Jeremy Corbyn, and what one can only conclude was a systematic attempt to prevent his supporters from voting in the leadership election - another form of deselection, if you will.

(Digression: that attempt was so blatant yet has been so under-reported that it's worth bringing out the key facts here, for reference. Here are the voting participation figures, first for members and then for registered supporters - i.e. those who paid £25 in order to take part:

As you will see, only just over half of members are counted among the votes in the contest. We don't know how many of those were due to suspension, exclusion, "lost" ballots, etc., but even allowing for the fact that some members would have decided not to take part that seems that an awfully low percentage of the electorate for such an important vote. But the real killer is the figures for registered supporters. These are people who paid precisely in order to be able to vote, so one would expect turnout among this group to close to 100%. In fact, however, more than a third - that's 62,000 - are recorded as "without a vote". The NEC compliance unit were working their Delete keys into the night, one might reasonably surmise. As a former foe of Trots once said, it's not who gets to vote, it's who gets to count the votes...)

Sometimes it seems that the right wing of the Party is a little paranoid, because it fears that the left will behave in the same undemocratic way that it's shown itself so capable of. (Indeed, back in the days of Blair I seem to remember the NEC itself drawing up lists of left-wingers for deselection...)

Corbyn doesn't seem at all keen on mandatory reselection, in fact - unsurprisingly, if he's trying to build a consensus (or at least a modus vivendi) in Parliament. The issue is probably only going to arise when boundary changes are introduced by the Tories - but even then, convention dictates that where two MPs are unseated by the disappearance of their seat and are forced to compete for a new one, only sitting MPs are considered. In most cases, the Labour CLPs will be given a choice between two people who voted to get rid of Corbyn. There will also be a few cases, no doubt, where there is a choice between a pro-Corbyn and and anti-Corbyn MP. In those, it's true, a left-leaning CLP may well opt for the former. I don't see how that's an affront to democracy, to be honest, or anything that the party at large should be losing its shit over. If MPs' numbers are being reduced by 50 and fewer than 50 MPs are willing to bow out, then obviously choices will be made, and if not by the local parties then by whom? But I expect to hear much, much more in the coming months about how this is the worst thing since the Terror - and nothing at all about the purge of the Labour electorate.

Three factoids I picked up from three different conversations with my Japanese friends on italki.com this week.

When Japanese women give birth, it is customary for the hospital to take the umbilical cord and put it in a little box. The mother is then presented with it as a memento on leaving the hospital.

There is a kami who specialises in straightening out badly behaved children. His twisted staffs symbolise the crooked behaviour of the children he has to deal with, usually as a result of a prayer of the parents. 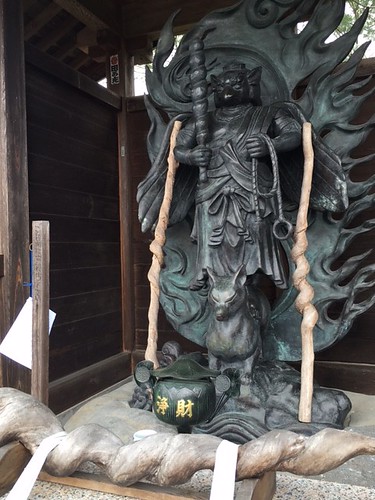 Also, he gets to ride on a fox.

Whenever a train is late and it is deemed to be the driver's fault, the driver is made to write a letter of apology to the customers. However, whenever a Japanese salaryman feels that it's all too much and throws himself in the path of a speeding shinkansen (as happens all too often), the family is made to pay a large amount of compensation to the train company - pour encourager les autres, presumably.
Collapse