In a locked post today an LJ friend makes a number of characteristically interesting points about the EU referendum and its likely aftermath, most of which I agree with. However, I'm not so sure about his assertion that Jeremy Cobyn is "toast", no-confidence motion or no.

It's true that Corbyn has never been very gung-ho about the EU as an institution, and his support for Remain (much like my own, which may bias me) always had a tinge of "The EU may not be great, but the alternative you're being offered is hell of a lot worse" - which may not be a cry to get the blood up, but has the merit of being true, or at least honestly meant. Unlike some of those who now wish to depose him, he never coasted in the slipstream of the Brexiteers' anti-immigrant rhetoric, but pointed out that immigrants actually more than pay their own way in taxes, and that if local services are stretched that's because of cuts imposed by Government, who wish to spend the nation's wealth in other ways. Conversely, he didn't connive in the lie - known to be such by both tellers and told - that one could set an arbitrary upper limit to immigration under freedom of movement rules.

So, what he had to say - about preserving workers' rights, environmental protections, opportunities for young people, and the rest from racist demagogues like Farage and Johnson - was pretty reasonable.

But perhaps he didn't say it enough? In fact, the BBC (and a fortiori the rest of the media) went out of its way not to report his many appearances up and down the country. Take this screenshot from a couple of weeks ago, on the day he was due to give a big remain speech. If you look very carefully you may spot the very small headline mentioning that he is going to be speaking, somewhere near the very big headline about a union leader complaining of his silence. 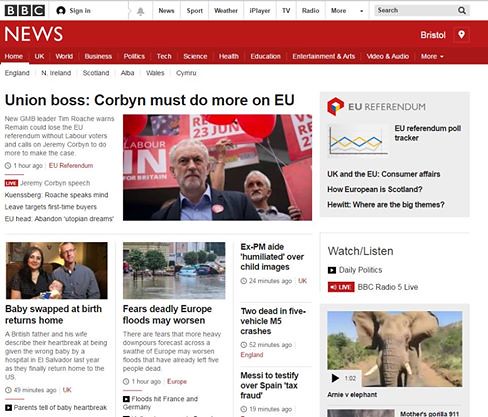 Later that day, after the speech had been given, this was the BBC news front page. See how long it takes you to spot the mention of Corbyn's speech. 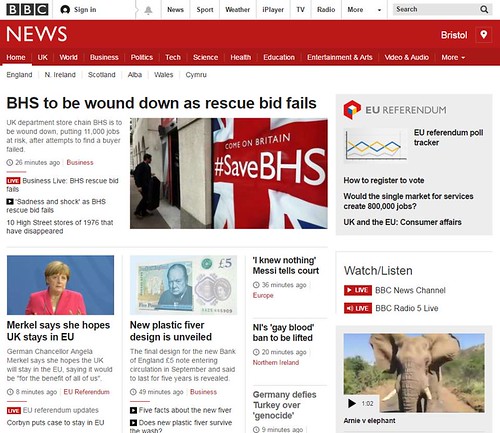 So, anyway, now there's a move to unseat him for not leading a vigorous enough campaign for Remain. Note that the reason Labour lost the last election was in large part the defection of many of their traditional working-class English voters to UKIP or Netflix on polling day. And now, they propose to reverse this trend by replacing Corbyn with someone more outspokenly pro-EU? I can't see how that works at all.

I also don't think the coup will work - the membership won't allow it.

Though, admittedly, my record on political prognostication is pretty dire.

How about directing your fire at the enemy for a change, comrades?
Collapse