All my possessions seem to be winding down in sympathy with me, dimly cognizant perhaps that my life, like the hinged year, is at a turning point. Yesterday I said goodbye to the car I'd had for ten years, waving it off as it disappeared on the back of a "dismantler"'s lorry. (I did rescue Littly My from the rear view mirror first, though.) Later, getting a taxi to the station, my phone slipped from my pocket, taking my numbers with it. The phone itself was a temporary - £15 - replacement for the £20 one that died the other week en route to the States, but I regret the numbers. My PC is currently refusing to talk to my screen, and altogether I feel like some kind of techno-Job, being stripped down to a poor bare forked thing ahead of next week's naked encounter. At the larger level, of course, this may be the day that the UK strips itself down to being (pace Donne) an island. It's hard not to get all Elizabethan-World-Picturey about these weird correspondences of inner and outer, macro and micro.

Not that I've had time to dwell too much. Last weekend I was helping run the Roald Dahl conference in Cardiff, and today I'm in Nottingham to examine a PhD. In between there have been exam boards, a quick visit to my mother, and my daughter making her last appearance before she turns 18 (another turning point - eep!).

At Bristol Temple Meads station yesterday there were many Glastonbury goers set for their annual bout of trenchfoot, but as yet their wellies gleamed green as emeralds. It's Midsummer Eve, a day that is of course ripe for magical transformations. Seeing the revellers (just at the moment I was leaving my phone in the cab) brought back sharply that other June 23rd-4th, in 2007, which I spent being quizzed all night by Tony Robinson in the British Museum, returning in the morning in a train slathered with the mud of Glastonbury's fallen, and going on to work, only to find that one of my friends had died at a meeting that morning.

But, enough. Have a picture of the peaceful Trent, taken as I walked back to my hotel from a nice pub supper yesterday. 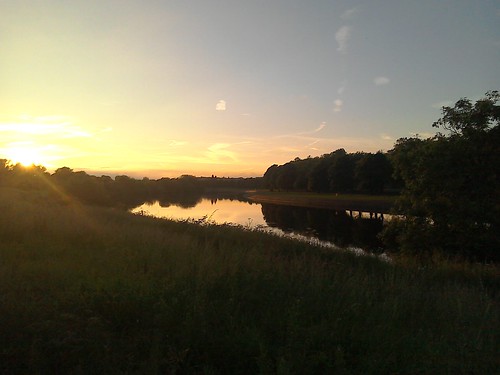