I've been in Japan for three days now, so I'm going to start writing up my experiences as and when I have time to spare from actually experiencing them. The rule is that adventures take priority (temporal, logical and moral) over their recounting, so there may be some gaps - but, like last year, I want to get things down as close to the tiime they happened as possible, to counteract issues of memory leakage... I'll probably hop back and forth quite a bit, but that's the way of memory. At least it will be gorgeously illustrated, courtesy of Japan.

Unlike last year, when strong winds almost cost me my connection in Amsterdam (and did cost twenty-four hours without luggage), this time I got out just ahead of the impending storm, at a moment when the bombers and hijackers were on their tea break, and the journey, though long, was pretty uneventful. On the plane from Amsterdam I switched back and forth between The Tale of Genji and the live-action version of Attack on Titan. The first was very enjoyable, in unexpected ways which I would illustrate with a few choice quotes were I not pressed for time and afraid of trying your patience (albeit I reserve the right to try it on a later occasion). The film wasn't a patch on the anime, sadly, which was no doubt not a patch on the manga, such being the general way of things, but it passed a couple of hours in a long flight.

We landed at Kansai airport in Osaka, which was not quite as big as I'd pictured it, and then I transferred by bus to Osaka International, which was really very small indeed, with a friendly, family-run vibe, if such a thing is possible for an airport. A local airport for local people, despite its name - but then, perhaps "international" in the name of an airport is like "democratic" in the name of a country - an indication that it's anything but. Waiting at the gate for the flight to Kagoshima (my first destination), I noticed that I was the only non-Japanese-looking person there, apart from a very distinguished-looking black man, inclined to embonpoint, dressed in a sharp black suit, with a fedora and dark glasses. Whether by coincidence or design we were seated together, and he introduced himself in a courteous Southern manner (he was from Alabama), explaining that he was going to Kagoshima "on business", something that often took him all over Japan from his home in Kobe. He didn't expand on that, and I didn't want to press him, but all kinds of colourful possibilities ran through my head, before I finally settled on the least lurid - i.e. yakuza hitman. He added that he had lived in Japan for so long that he sometimes forgot his English, a thought that has since haunted me when I've momentarily forgotten an English word myself. What if I'm losing my English too? Worse, what if I lose my English before I've learned Japanese? It's a race against time! To be stranded with no language at all is a humiliating prospect for a university lecturer. And all because I had the temerity to attempt to learn a foreign tongue...

Despite our being the only English speakers on board, all the announcements made by the cabin crew were repeated in English, which I'm sure is standard procedure but felt as if it were done especially for our benefit, or rather for mine, my Alabamian companion being fluent. This felt a little embarrassing, somehow, and I reminded myself that I would need to thicken my skin against such moments in the days ahead.

Anyway, we landed at Kagoshima - right in the south of the southernmost of Japan's main islands - and I was met there by my friend Chiho. Chiho's generosity with okashi has been extensively documented in these pages, but she is in any case (which I already knew but was to learn tenfold over the next couple of days) an exceedingly kind and generous person, and just the best fun to be with. She was also extremely tactful in helping me with my Japanese, which I appreciated, while in return I did a little Britpicking of her English - which she wishes to learn in the British variety, having been taught American English at school.

We began just outside the airport by soaking our feet in the wayside foot spa there (towels are provided, 100 Yen each in the honesty box - ah, Japan!). The water of course was toasty warm, having been piped straight from the volcanic springs that pock Kagoshima, and it made a wonderful start to the holiday proper, given that I'd had my shoes on for the previous 24 hours.

Volcanic springs, you ask? Why, yes, there's a volcano to go with them. Its name is Sakurajima, and it sits in the bay puffing smoke all day, reminiscing about the old days, when an eruption really was an eruption... 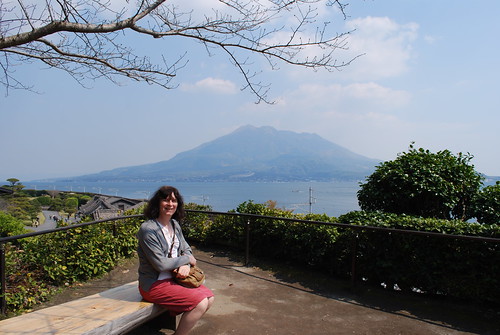 What could possibly go wrong?
Collapse