I’ve long been fascinated by the machismo that seems to be automatically triggered in the minds of advertisers when it comes to male versions of products traditionally associated with women. Men want to dye their hair? Naturally they’re not going to buy the same products as women, coming as they do with the double danger of castration and cooties, but nor is it enough to change the label to “Men’s Hair Dye”. No, you have to call it “Just for Men” – the branding equivalent of a sign on a bedroom door reading “Girlz Keep Out” in felt tip. It's much the same with men's shampoo - as this advert, with the slogan "German Engineering for your Hair" suggests, to a backdrop of racing-car noises.

When they started marketing men's moisturizer it was generally advertised with uber-masculine figures such as rugby league players - or these uncredited extras from The Professionals (whom I saw in Taipei airport in 2013 - this is not a purely British phenomenon): 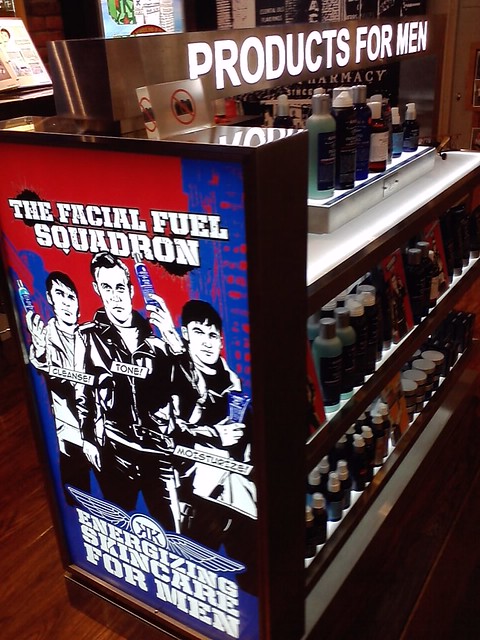 What about actual cosmetics, though? I'd heard of guyliner and manscara, but these (despite the naffness of the names) were associated with an attempt to blur the boundaries of gender presentation - quite unlike the cootie brigade. Had anyone tried to make make-up macho? Googling led me to this web page and its advert for Calvin Klein Foundation for Men, a rather anonymously packaged product but advertised here with the following reassuringly illiterate copy (because spelling and apostrophes are for wimps):

Mens skin tends to be more oilier than our sexual counterparts, meaning such a powder foundation is perfect for shine control and will ensure your face doesn’t shimmer and glow; because let’s face it fellas, masculinity is everything! Like other CK makeup for men, this mens foundation offers fantastic natural coverage and optimal blending. This, combined with it’s ability to alleviate your natural skin pigments, most importantly melamin, means a machismo riddled perfect complexion is now just one application away.

Still, perhaps the advertising could be even slicker? Rather than "Calvin Klein Foundation for Men", they could call it something redolent of spies and James Bond, like "Undercover"? "When you're working undercover, everything runs more smoothly" - cut to Our Man under the sheets with enthusiastic companion. The packet could be stamped "TOP SECRET" in red. Awesome.

Better still, call it "Camouflage" and get Ray Winstone to voice up an advert, showing a man looking a bit pale the morning after an evening of drinking and minor street offences, but needing to look good for that all-important interview.

"Tough night? Time to man up with Camouflage."

Cut to same man looking happy, having got the job.

"Camouflage. You can build great things on a strong foundation."

I did apply for a job in marketing, once. It's probably just as well I didn't get it.
Collapse