In this entry a week or two back, which was mostly about something else entirely, I mentioned in passing that I’d run across Kiniro Mosaic, a charming slice-of-life anime about an English girl and her friends at high school in Japan. The first episode was largely set in England, and I commented: “They do seem to have done some pretty good research when it comes to the look of the Cotswolds, though: I felt I'd seen the town before, but I'm not quite familiar enough with the area to be sure.”

Well, thanks to some crowd-sourced research on Facebook (thanks

adaese amongst others), I can confirm that the town near which Alice lives is in fact Cirencester – a place I’ve been to innumerable times, though not much recently – hence the tantalizing familiarity. I feel foolish for not recognizing it at once, but anyway, it was fun getting Google Streetview to line the shots up: 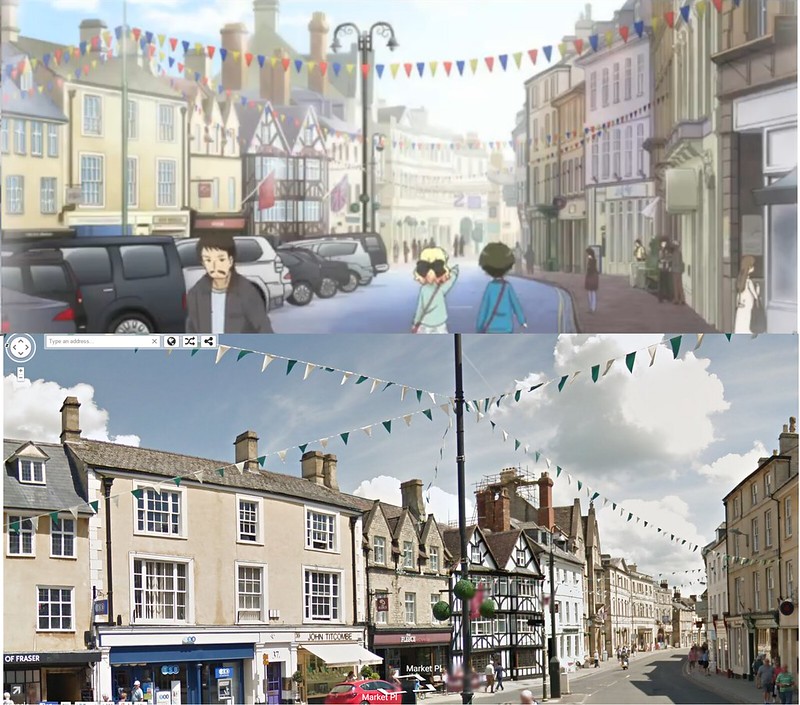 And this is apparently the entrance to nearby Home Park:

Of course, now I want to pop over to Cirencester (it’s only 40 minutes in the car) and pose like Alice and Shino. If only I knew someone who’d be willing to be my accomplice in so silly a mission.

No doubt you've been wondering about my views on the election (right?). Well, I can't speak as to the likely result nationally: I hope for the best and fear the worst, of course.

Bristol West is another matter. It's a fascinatingly fluid seat, which has been Tory, Labour and LibDem within the last 20 years. There's no such thing as a safe seat, here.

In 2010 the LibDems won by a 20-point margin. Partly this was because of their cast-iron pledge on tuition fees (there are a lot of students here, and a lot of parents of students); partly it was because of residual Clegg-mania (already on the wane by the election but still non-neglible). But mostly I think it was because there was a large group of voters who would never dream of voting Tory but had become disillusioned with Labour, not on economic grounds so much, even if their love affair with market capitalism had made them almost as vulnerable to the crisis in the banking sector as the Tories would have been in their place, but because of their centralist, authoritarian and anti-civil liberties stance. This was the party of control orders and identity cards, after all - to say nothing of the damned spot of Iraq, which no rude seas would easily wash out. So, a vote for the LibDems as a more socially libertarian alternative seemed attractive.

All that went west when the LibDems installed a right-wing Tory administration. That betrayal (with the tuition fees U-turn as icing on the cake) led to a collapse in their support - how could it not? There's a huge anti-Tory majority here, and a vote for the LibDems being (as we now know) potentially a proxy vote for the Tories, of course they're screwed.

So, at that point, Labour looked a shoo-in for the seat, bouncing back from 2010. But here's where it gets interesting. Bristol West has a higher proportion of people with university degrees and doctorates than any other constituency in the country. It's a hot-bed for anarchists and for eco-warriors. In most places, the Ashcroft poll would be tomorrow's chip paper, but people here read about these things and talk about them too. There's a sizable number who had been intending to vote Labour only to get the LibDems (i.e. the Tories) out. When Ashcroft showed that the LibDems were already effectively out, it became much more thinkable for these people to vote Green, a party more in line with their actual beliefs, and potentially (given the likelihood of a hung parliament) giving their MP a real say in policy, much more so than if they turned out to be just one more in the three-line-whipped ranks of Labour lobby fodder. I suspect a lot of the 38% Labour support that Ashcroft polled was very soft, and I suspect a lot of it has now moved over to the Greens.

So, what do I predict tomorrow? I think the Tories and LibDems will do very badly, but very slightly better than the polls, on the principle that there are "shy" voters for both parties, and because the LibDems in particular have an efficient polling day machine. I expect Labour to win - but by a far, far, smaller margin than the Ashcroft poll might have suggested. I expect the Greens to run them a close second place, and be poised to take the seat next time if events run their way.

I also expect to be wrong, because I usually am. But for fun, here are my predictions tomorrow, set against the results in 2010 and the Ashcroft poll. Sorry about the colours and the cognitive dissonance - I haven't got time to work out how to fine-tune this in Excel: 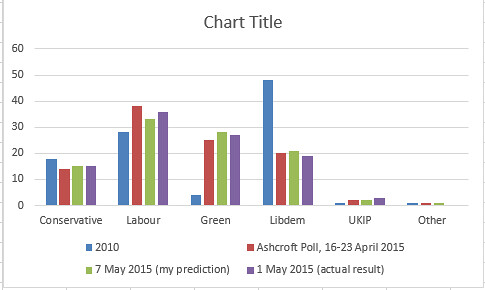 When I get the chance, I'll edit this post to add the actual result - then you can all point and laugh. [ETA: I've now done that. As you can see, I was pretty much on the money with the Conservatives and LDs, but overestimated the extent to which Labour would lose votes to the Greens, post-Ashcroft. Not badly enough to be laughable, though.]
Collapse