How exciting! I've had this book on pre-order for months, and it's finally arrived! 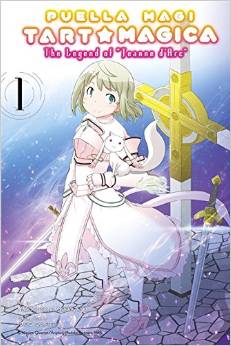 As you might guess from the title, Puella Magi Tart Magica is a spin-off manga from Madoka Magica. I've already a read a couple of such spin-offs, one of which (The Different Story) was very good, while the other (Oriko Magica) I was a bit less struck by. This new effort is by the same artist as Oriko, but I still have high hopes for it because of its angle of approach. It picks up on a visual hint in the last couple of episodes of the anime that Joan of Arc (along with several other well known young women of history) may have made a contract with Kyubey, and become a magical girl in the fifteenth century. To quote the Amazon blurb:

Joan of Arc is revered as a hero of the Hundred Years' War and a saint of the Catholic Church. But her leadership and strength of character in her time did not escape the notice of Kyubey, who, even in the fifteenth-century, sought Magical Girl candidates for their valuable energies. With her friends and fellow Magical Girls fighting at her side, Joan fights the English occupiers of France--but will she soon find herself fighting something much more sinister?! 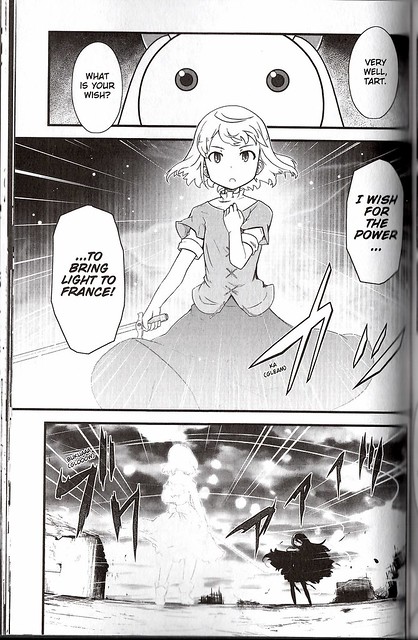 (Yes, of all the many names by which Joan has been known over the years, the writer of this manga decided to go with Tart. Never mind; that's a but trifle here.)

I naturally hope the manga will be good, but even if it's embarrassingly bad it still ticks several of my boxes, particularly the ones marked "alternative history" (I've got to write a chapter on that for an encyclopedia by this autumn) and "canonical fanfic" (see these entries from before Christmas, which I'm also planning to work into something more substantial), and of course "Japanese appropriations of Western culture and history". Puella Magi Tart Magica may in fact be as close as I ever get to reading the mythical Pretty Petra Pope.

That said, there are limits to my taste for appropriation, and while I wouldn't mind seeing a spin-off based on Cleopatra, I'd feel queasy if they did a manga about Magical Girl Anne Frank - another of the figures whom the series glancingly suggests may have contracted with Kyubey. I just hope they don't go there.

Meanwhile, according to this report, "Tokyo's Tokai University, known for its focus on sciences and engineering, has started exploring how the emotions of young girls can stop the heat death of the universe". As the photos demonstrate, it's standing room only.
Collapse