Having idle occasion to look into the origins of baseball, I was led by Wikipedia to this image from John Newbery's A Little Pretty Pocket-Book (1744), which is apparently the word's first appearance in print. 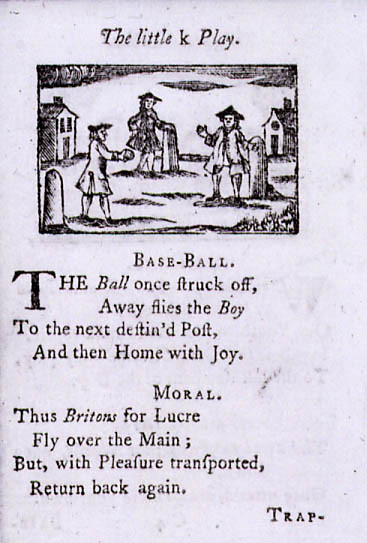 Isn't it curious that the first mention of baseball and the first children's book (depending how you define it) coincide in the same small volume? But I'm as interested in the rhyme, which takes running round the bases as a metaphor for Britain's maritime trade.

BASE-BALL.
The Ball once struck off,
Away flies the Boy
To the next destin'd Post,
And then home with Joy.

MORAL.
Thus Britons for Lucre
Fly over the Main;
But, with Pleasure transported,
Return back again.

Echoes here of Donne's compasses, perhaps, and the poem also gives an interesting resonance to phrases such as "naval base" and "trading post". It may be the earliest example - unless you know different? - of a poem in which a childhood game is taken as a model, and perhaps a preparation, for adult imperial endeavours, a trope that found its locus classicus 150 years later in Newbolt's "Vita Lampada". (Rolf Harris's version of "Two Little Boys was perhaps a step too far down the same road.)
Collapse