When Annie Robina Buter wrote her 1907 memoir of her father Thomas (my great-great-grandfather), she reflected regretfully on the fact that, following his own father's succumbing to severe depression and the consequent decline of his school in Cheyne Walk, Thomas was unable to attend University. Nevertheless, she remarks, "One must not be too sorry:

For some reason, those lines popped into my head the other day. They sounded familiar, and were clearly so to Annie Robina, but what she was quoting? Several places on the Internet refer to it as an old saying, but as far as I can discover the source appears to be a really rather bad poem called "The Cripple Boy", which was in circulation in Sunday schools by the 1880s. I can't find a definitive version, but I've put together the following from the various fragments and retellings floating round the Internet:

The tl;dr version is that the "cripple boy" of the title feels himself to be a burden to his poor widowed mother (it doesn't help that they live in a hut at the top of a steep mountain track), and wonders what the point of his existence is, but is assured by her that "God has a plan for every man/ And he has one for you". Eventually he is able to thwart an attack on his country by lighting a warning beacon - an endeavour that simultaneously validates his existence and costs him his life. So, perhaps Annie Robina (a sometime Sunday school teacher) was quoting that directly - and since she sets the phrase out as verse this poem does seem the most likely source. I don't know the name of its author nor the date of composition, but the story it tells, now narrowed down the Tyrol (with the French cast in the role of enemy - suggesting a Napoleonic setting), is already being recounted as a familiar one in Ontario by 1866.

So, the story was well known, and the poem was also well known in the kind of circles Annie Robina moved in. No mystery, really; nevertheless, I couldn't resist buying a copy of this (it was very cheap!): 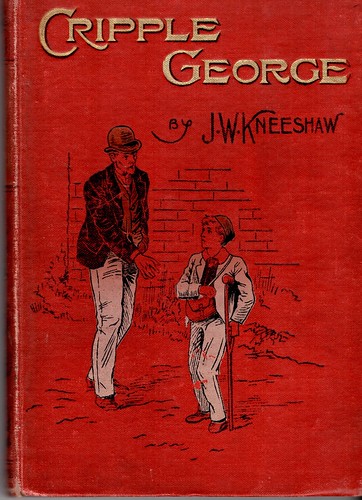 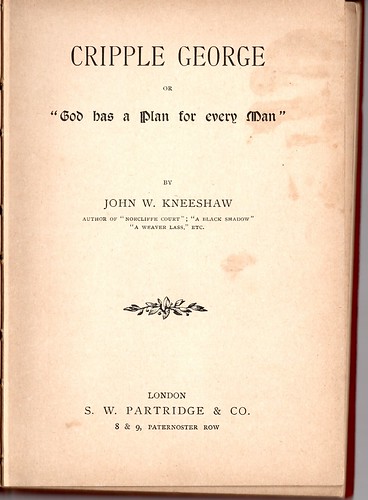 No, it's not the slightly-less-violent sequel to Kill Bill, but an 1899 temperance novel about a poor lame boy who grows up hardworking and devout, having been inspired by hearing "The Cripple Boy" recited at a Band of Hope meeting. Eventually, his good qualities result in the reform of his drunken and abusive father and his whole family, who become prosperous and useful members of society. It's pretty standard temperance stuff, though I admit I eeped a bit at these lines of dialogue, in which our hero is being quizzed by his elder brother about his treatment at the hands of grammar school boys:

"Have they been kind?" asked Tom.
"They laughed at me, and called me 'Crutchy', but they didn't mean to be unkind."

The author, John William Kneeshaw, is identified by various sellers on Abebooks as a Labour politiican from Birmingham and pacifist during WWI (you can read about him here). However, this site claims as author another John William Kneeshaw, a sometime headmaster from Burnley with a fondness for the cane. Internal evidence suggests the latter to me: aside from the title-page attribution of "A Weaver Lass" as one of his other works (a more Lancastrian title is hard to imagine), this isn't a Socialist book by any means, but one in which middle-class people such as doctors and priests intervene benignly in the lives of the poor to save them from themselves. Though, I suppose one might argue that that's actually not a bad description of Karl Marx.
Collapse