Look what I just bought! 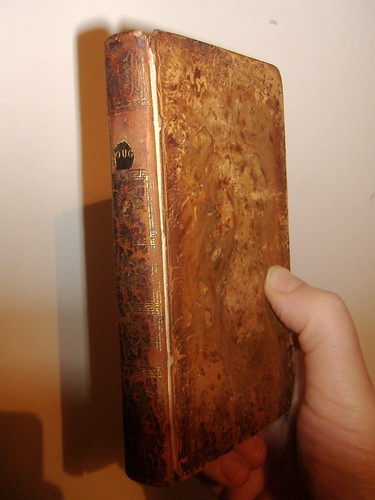 It's my great-great-great-great grandfather Weeden Butler's copy of William Dodd's Thoughts in Prison, a long poem that that Dodd wrote while awaiting execution for forgery in 1777 - the last person to be hanged for that offence in this country. (He had forged a bond from Lord Chesterfield in order to pay off his creditors.)

Weeden had a long and close association with Dodd, dating from well before the latter's fall from grace. According to Weeden's 1823 obituary, "The systematic course of [Weeden's] classical and theological reading, which he never entirely laid aside, was in an essential measure chosen, directed, and aided, by that variously-gifted but unhappy character, the eloquent, the learned, the polite, the humane, the gay, vain, extravagant, dissipated, handsome, very popular preacher, Dr William Dodd; to whom, in his turn, he acted as an assiduous and indefatigable amanuensis, from 1764 till his patron's ignominious end in June 1777" (The Gentleman's Magazine, p. 182). In fact it was Weeden who was responsible for transcribing and editing Thoughts in Prison. In 1793 he described the circumstances of its composition:

Often have I seen and sat by the author, in prison, while he was composing the melancholy poem, and at such times he seemed to write with nearly as much readiness as when engaged on other works in his far happier days! My transcript for the press faithfully and literally adhered to his rough copy, as corrected by himself. (The Gentleman's Magazine, p. 234)

The cover and the first endpaper have become detached, which is unfortunate but at least means that I've been able to scan them for you. You will see that it has Weeden's name stamp and the date 1792, for this is the third edition (Weeden would of course have had a copy of the first edition of 1777, and probably the second too, but goodness knows what happened to them). There's also a note by the book's one-time owner, Gerard Weeden Butler, Weeden's great-grandson (and my first cousin three times removed). Gerard wrote his note in 1894 - the same year, in fact, in which he made his own appearance in print as the man who cycled from Krakow to Koblenz by pennyfarthing, an adventure recounted previously in this journal: 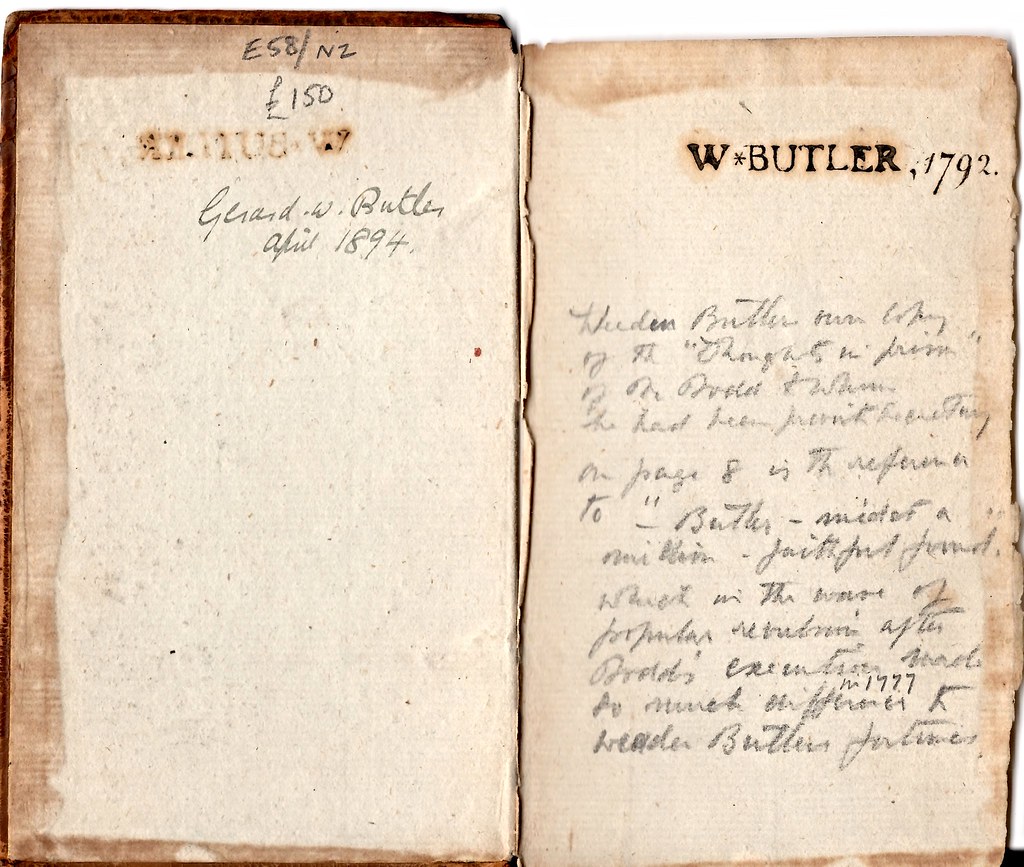 The pencil note isn't very clear, so here's a transcript:

Weeden Butler's own copy of the "Thoughts in Prison" of Dr Dodd to whom he had been private secretary.

On page 8 is the reference to "Butler - midst a million faithful found", which in the wave of popular revulsion after Dodd's execution in 1777 made so much difference to Weeden Butler's fortunes.

I must say I find the relationship between Weeden and Dodd very intriguing, and Gerard's remark about the effect of that line (a brief passage in the poem in which Dodd praises Weeden) only increases the puzzle. Thoughts in Prison was a popular success, and Weeden must have been a beneficiary of the sentiment in favour of Dodd, but what material difference did that make to his fortunes? I've often wondered how Weeden, the sixth son of a Margate solicitor and an orphan by 14, managed to end up well enough off to own a huge house in Cheyne Row, and supposed that Dodd's patronage in the days when he was a popular preacher had a lot to do with it. In 1776, for example, Weeden took over from Dodd as the preacher at the Charlotte St chapel in Pimlico, which must have been very lucrative - but what post-mortem benefits came his way? Perhaps it was in the form of patronage for his school, or the acquisition of further livings (he appears to have had a few by the end).

Also, though, Weeden appears by all accounts - even allowing for the fact that most of the accounts are fairly encomiastic - to have been a model of sobriety and square dealing (yes, he was a freemason). He doesn't seem an obvious person to get on well with Dodd, the extravagant "Macaroni parson". The latter's forgery wasn't entirely a one-off, either. Let me quote to you a passage from the account of Dodd's life in this volume, describing an earlier brush with ridiculousness, if not infamy, in the form of attempted bribery:

On the translation of Bishop Moss, in February 1774, to the see of Bath and Wells, the valuable rectory of St George, Hanover Square, fell to the disposal of the Crown, by virtue of the King's prerogative. Whether from the suggestion of his own mind, or from the persuasion of some friend, is uncertain; but on this occasion he took a step of all others the most wild and extravagant, and least like to be attended with success. He caused an anonymous letter to be sent to Lady Apsley, offering the sum of 300l. if by her means he could be presented to the living. The letter was immediately communicated to the Chancellor, and, after being traced to the sender, was laid before his Majesty. The insult offered to so high an officer by the proposal, was followed by instant punishment. Dr Dodd's name was ordered to be struck out of the list of chaplains. The press teemed with satire and invective; he was abused and ridiculed in the papers of the day; and to crown the whole, the transaction became a subject of entertainment in one of Mr Foote's pieces at the Haymarket.

As no explanation could justify so absurd a measure, so no apology could palliate it. An evasive letter in the newspapers, promising a justification at a future day, was treated with universal contempt. Stung with remorse, and feelingly alive to the disgrace he had brought on himself, he hastily quitted the place where neglect and insult attended him, and went to Geneva to his pupil, who presented him to the living of Winge, in Buckinghamshire, which he held, with Hockliffe, by virtue of a dispensation. Though encumbered with debts, he might still have retrieved his circumstances, if not his character, had he attended to the lessons of prudence; but his extravagance continued undiminished, and drove him to schemes which overwhelmed him with additional infamy. He descended so low as to become the editor of a newspaper, and is said to have attempted to disengage himself from his debts by a commission of bankruptcy, in which he failed. From this period every step led to complete his ruin. In the summer of 1776 he went to France, and, with little regard to decency, paraded it in a phaeton at the races on the Plains of Sablons, dressed in all the foppery of the kingdom in which he then resided.

Looked at in a certain light there's something appealingly Toad-like about Dodd's inability to learn his lesson. At any rate, I treasure "He descended so low as to become the editor of a newspaper". He still doesn't seem like a natural friend for Weeden - yet the two appear to have had great love for each other. Three days before his execution, Dodd wrote to Weeden in the following terms:

As this is the last letter you are likely ever to receive from me, I have taken a large sheet of paper; not knowing either how I may be carried out to speak to you, my dearest friend, or what I may have to say. Though I am indeed truly thankful to God, that he has been pleased to spare your life [Weeden had been seriously ill], yet I am sorry to say, that I mourn almost every day for your company. It would have been, indeed, a great consolation to me, in my sad and dismal hours, had the Lord permitted. So long known and tried, I could have poured my soul into your faithful breast. (24th July 1777)

For his part, Weeden wrote of a grief that seems to have gone well beyond gratitude to a former patron. Dodd "was buried, with lime in his coffin, at Cowley, in Middlesex, on the North side of the Church, and close to it, towards the East, where not a stone tells where he lies; but where I lately trod, and sighed, and wept, and was not ashamed of so doing" (The Gentleman's Magazine, 1790, p. 1077).
Collapse