Dinner yesterday at Linda's house in Königswinter near Bonn, with convivial friends, more great food and a magic show courtesy of her grandson, was extremely enjoyable. But this morning saw us travelling to Cologne airport, whence I flew back to England in a dinky propeller plane. I saw nothing of Cologne itself, alas, due to pressure of time.

At the airport there were many signs for an airline called "Germanwings": apparently it's a subsidiary of Lufthansa that deals with short-haul flights, largely within Germany. I tried to imagine a world in which British Airways had a branch concentrating on domestic travel called "Britischenflügel", but the effort made me dizzy so I soon left off.

I have eaten all too well over the last few days, but I knew I was back in Britain when I got to Birmingham New Street and saw a packet of Ranch Raccoon crisps, flavoured (as one would expect and rightly demand) with "sour cream from Dorset". They actually taste pretty good. I made a pious libation of Tizer, and kissed my native turf. 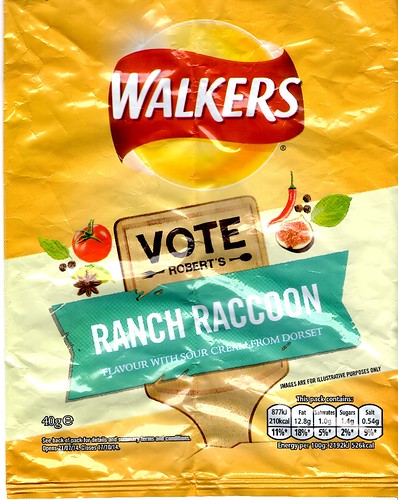 
Over the course of this trip I've been reading the one major work of C. S. Lewis's that I'd never got round to, Till We Have Faces (1956). I'm not sure why I've not read it before: I've had several people tell me over the years that it was their favourite, starting with my father, and I like reading versions of Eros and Psyche, of which it is one. I suspect a certain orneriness, for all that I told myself I was simply "saving it up". Actually, skewering that kind of self-deception is something CSL does particularly well in this book, having refined the technique in The Screwtape Letters.

Anyway, it is indeed very good, stylistically as well as psychologically. (I've not quite finished it, but I'll try to do that tonight.) Inevitably perhaps I keep being reminded of other CSL books. When Orual visits Pysche in her palace and thinks that the fine wine she is offered is water and the goblet holding it merely cupped hands, it's hard not to be reminded of the dwarfs in the stable in The Last Battle, published the same year. And the whole book has a broad seam of The Great Divorce running through it. The deep understanding of grief and depression that underpins A Grief Observed is foreshadowed here, too.

I was particularly struck by this exchange between Orual and the soldier Bardia, after they see Psyche (Orual's younger sister), who is convinced that she has found her way to another world:

There's an echo here of that other older sister's concern, for a child similarly convinced:

"We were afraid it mightn't even be lying," said Susan; "we thought there might be something wrong with Lucy."
"Madness, you mean?" said the Professor quite coolly. "Oh, you can make your minds easy about that. One only has to look at her to see that she is not mad." (LWW, 1950, Chapter 5).

It's not so much that Lewis recycles as that he recycles a very implausible idea - that it's possible to tell more or less at a glance whether someone is mad. Did Lewis really believe this? In a way he had to, because that assumption underpins one of his most famous arguments for Christianity:

I am trying here to prevent anyone saying the really foolish thing that people often say about Him: I’m ready to accept Jesus as a great moral teacher, but I don’t accept his claim to be God. That is the one thing we must not say. A man who was merely a man and said the sort of things Jesus said would not be a great moral teacher. He would either be a lunatic — on the level with the man who says he is a poached egg — or else he would be the Devil of Hell. You must make your choice. Either this man was, and is, the Son of God, or else a madman or something worse. You can shut him up for a fool, you can spit at him and kill him as a demon or you can fall at his feet and call him Lord and God, but let us not come with any patronising nonsense about his being a great human teacher. He has not left that open to us. He did not intend to. ... Now it seems to me obvious that He was neither a lunatic nor a fiend: and consequently, however strange or terrifying or unlikely it may seem, I have to accept the view that He was and is God. (Mere Christianity, 1952

It seems strange that the man who penetratingly analyses so many kinds of everyday self-deception and delusion should be happy to think of madness in the cartoonishly binary terms of someone either thinking they are a poached egg or else being "obviously" sane, and not feel inclined to probe the question further either in apologetics or in fiction.
Collapse