I went to a presentation by the new postgraduate students today, in which they were introducing their various research topics. One was looking at dialects of British Sign Language, which sounds really fascinating. I was struck by his example of the different signs that are used in various parts of the UK for the number six. For example this is what it looks like in Bristol, London and a place he called "up North" (apologies if I've got any of this wrong): 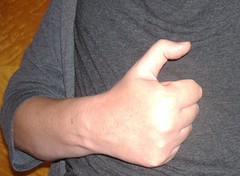 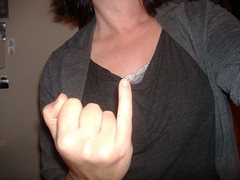 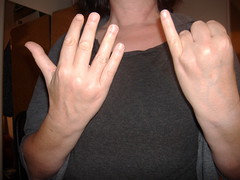 Bristol looks like an iconic representation of the Arabic numeral 6; Up North is simply six fingers held aloft. I'm not sure what the system is in London, but I'm guessing that it's something analogous to tally marks, with the fist meaning one group of five, and the finger adding one to that. What are the proper semiotic terms for these differences, I wonder?

Also, very tangentially, Hunter Davies was talking about the Beatles on the radio the other day, as is his wont, and mentioned a story that was new to me, though probably not to others. Apparently when "I Want to Hold Your Hand" was a hit in the States - their first hit, in fact - Bob Dylan heard it and misheard the line "I can't hide" as "I get high" (which is actually quite easy if you hear it in isolation). From this he assumed that the Beatles were all taking drugs, and so naturally offered them some when they eventually met. They meanwhile had never partaken, but quickly got a taste for it after that, opening the way for "Strawberry Fields", "A Day in the Life", etc. And all because of a mondegreen!

It's a nice story, anyway.

Meanwhile I've been trying to write my next Madoka post, but am finding it hard to keep everything I want to say sufficiently separate and within bounds. Basically I want to write a book on the subject, in fact. Oh well, I think I shall do something short(ish) and sweet on genre, which will clear the way for another one on structure, and at least one other that I have in mind. Watch this space.
Collapse