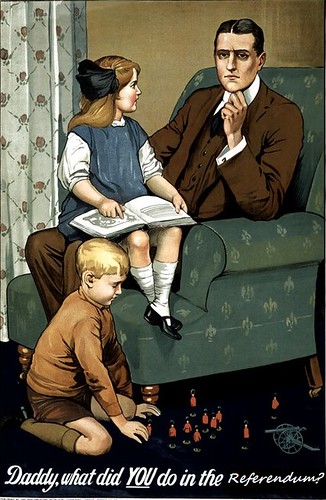 My father told me once that this poster (or its accompanying slogan) was one of the things - along with a general sense that he was missing out on history - that made him stop being a CO and join the army in 1942. The context for the remark was my rather priggish teenage disapproval of his relenting. "I never expected the criticism to come from that direction," he said, or words that effect.

I've made a slight change to the classic poster, to reflect the increasingly successful strain of mood music being played by the Yes campaign in Scotland. There'll only be one chance to think of your children, to do what's right for Scotland, etc. (The No campaign's rendition of the same tune has been rightly mocked.) In the end, it's much easier to envisage today's children berating their parents in future years for bequeathing them a lifetime of austerity rule from an indifferent city hundreds of miles away than for giving them an independent country which is slightly less prosperous than it might otherwise have been - which appears to be the scariest prospect the No campaign can muster. And you'd have to be a fool to give much credence to the Westminster parties' last-minute floundering to give Scotland "Something (but we don't know what) some time (but we don't know when)". At this rate I half expect David Cameron to announce free neeps for all under-5s.

Ah, if only they'd listened to me in June they wouldn't be in this mess, but I fear that's destined to go down as one of history's great missed opportunities, along with Jim Callaghan's autumn 1978 election, and Byrhtnoth's defence of the causeway at the Battle of Maldon.
Collapse