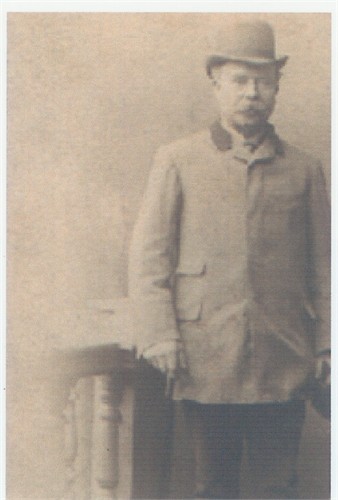 The mind that has not been formally educated is not trapped in linear time. Memories of named individuals are identified for about three or four generations. Then the way is blocked, usually by a patriarch, beyond whom there is nothing, and to whom accrete tales and exploits of a giant. But I suspect that they are the accretions onto an individual of generations of history; for, beyond linear oral memory, we are in mythic time, where everything is simultaneously present.

Thus Alan Garner – and I can see what he means. Indeed, I have a good linear-mythic contrast in my own head, corresponding to my paternal and maternal lines. On my father’s side are the educated and linear Butlers, with their obsessive hoarding curatorial habits, gentle birth and Forrest Gump-like habit of standing in the frame (though well off centre) of so many famous lives and events. Researching them is easy and rewarding. On my mother’s side stand the working class, underdocumented Bowmans. I’ve written a lot about my grandfather Percy, the sailor, and even arranged for his incorporation into Our National Story in Greenwich, but beyond him the way has been blocked. I knew that Percy’s mother Mary ran a pub in Wrexham and outlived several husbands. (She is in fact the second matriarchal innkeeper I’ve come across in my researches – the first being Mrs Dewberry, the mother of my great*5 grandmother Catherine (born c. 1706) – and both appear to have been formidable figures.) But my great-grandfather, Alfred, drank the profits and died at 36 in 1901. All he left behind him was 1½d, which was found under his pillow. My grandfather, 12 at the time, drilled holes through the centre of the coins and kept them on a ring – a hollow patrimony.

As for Alfred’s own father, Thomas Bowman, all I knew about him was that having been a labourer he became a quartermaster sergeant in the 23rd Royal Welch Fusiliers, and spent a peripatetic life in the military, including service in the Ashanti war. Though he and his wife Emma ended up in Wrexham, neither was Welsh (he was from Devizes, she from Yorkshire). Alfred was their only son, but a year after Emma died in 1892 Thomas married a twenty-year old local woman (he was then in his mid-‘50s, and Alfred was thirty), by whom he had seven more children.

My mother knew nothing of this until a couple of weeks ago, when my cousin found it out. She had a sense that her great-grandfather wasn't to be talked about, but since no one did talk about him she didn't know why. It's very hard to know what to make of it, and I find myself snatching at scraps as I try to make some kind of empathetic connection. ("He had lower back pain? I get lower back pain!") But it's sad end to whatever kind of life he led. I wish there were someone to tell its story - but through alcoholism and an early grave in one generation, and depression and suicide in another, the way is blocked.
Collapse