So, I thought to myself, why rant here for nothing when I could be ranting in a national newspaper for money? Thus was born this contribution to the debate over the current constitutional crisis, in which I propose moving the capital of the UK from London to Glasgow in the event of a No vote in September.

Unfortunately, it was published on the Guardian site just as I was leaving to catch a coach to (ironically) London, where I spent yesterday evening at a fabulous concert given by my brother and the folksinger Chris Wood. It was a great evening, but one devoid of internet (bar 15 minutes at a cafe) so I wasn't able to keep up with the comments, of which there are now around 500. They divide between those that think I'm being serious (which I am) and those that think I'm joking (which I also am) - so, just what I would have hoped for, really. One thing that did surprise me was that some commenters appear to believe that the English don't habitually conflate the UK and England. I was glad to have it Engsplained that the innumerable occasions on which I'd observed this happening were all in my imagination, and if I were on Twitter I might be considering a #notallsassenachs tag.

Something else I discovered rummaging through my mother's drawers [pulls Frankie Howerd face] the other night was this: 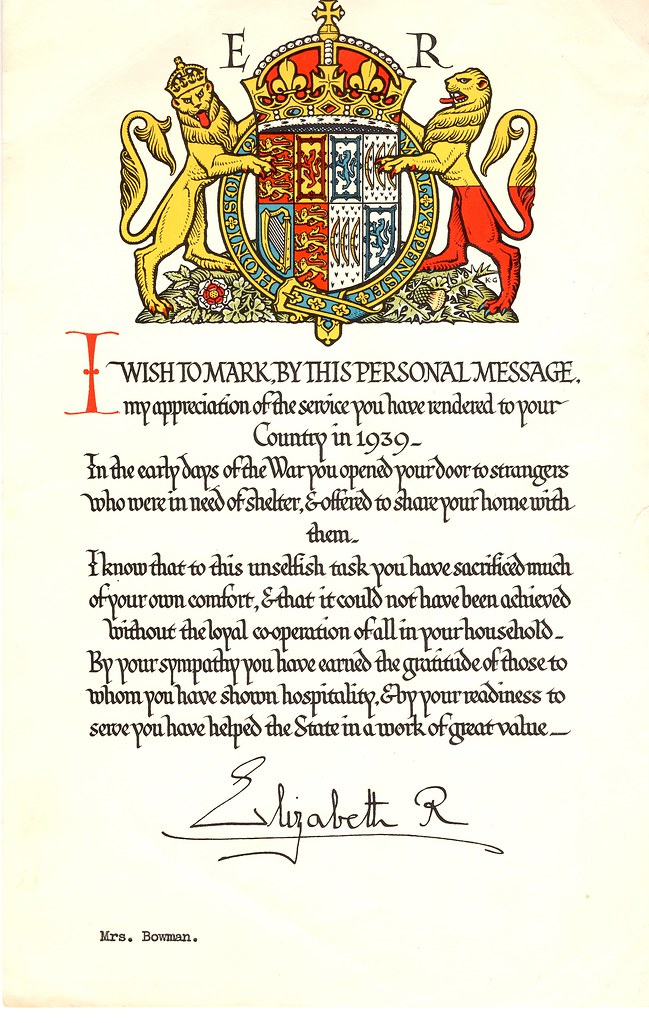 It's a message of thanks from the queen to Mrs Bowman (my grandmother), in appreciation of her taking in evacuees during the Second World War. There must have been millions of these things printed, and I'm sure many families carefully preserved them, but I'd never seen or heard of them before - so this is for interest.

What I'd actually been looking for, for the benefit of Captain Lewis's great-granddaughter, were the pictures of my grandfather at his first wedding, some time in the 1910s, which is as near as I can get to his 1908 self. I failed to find them, which is a bit of a mystery, but I did come across these WWII pics, one in full-on Captain mode, and one in shirt-sleeves, taken in Caen a few days after D-Day. I find the contrast between them quite telling.