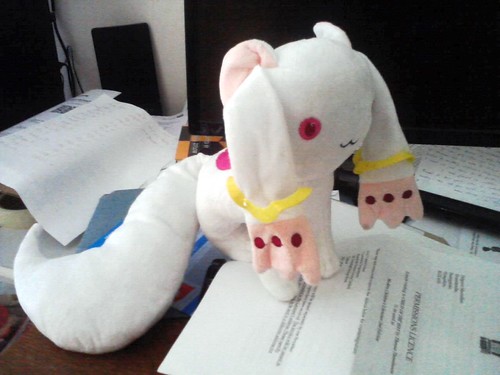 Meet my new assistant. When he turned up he said something about being able to help me with contracts (my Japanese isn't brilliant, as you know) so I put him straight to work.

It's been a rather tiring week, with too many trips into deep Devon - a lovely county, but not when most of what's on view is the M5. Yesterday it was a 6.30am sunshiny start to Barnstaple, where I was taking part in a programme review, but never saw the sea. On Monday it was to Exeter for medical stuff, plus lunch with the great-granddaughter of Captain John Lewis (master of the St Cuthbert), who had contacted me after reading my grandfather's account of the disaster in this blog. I wonder what the stern Captain and his Fourth Officer would have thought if they could have seen us - she with a selection of Iceland lollies, I with my trusty cheese and watercress sandwich - picnicking on the dry slopes of the old castle moat? Ah, mutabilitie!

What else happened this week? Ah yes, a very interesting seminar paper on Wednesday by a lawyer colleague on the application of international law to child soldiers - including, of course, those who serve in the British army.
Collapse