Every day I get sent a random Japanese word to learn by About.com, but lately they've been a bit frustrating. Yesterday's word, for example, was "osameru" ("to rule; to govern"). Easy enough, until you get to the helpful example sentence...

... which doesn't appear to involve ruling or governing, but something else entirely (arbitration? resolution?). Gah.

Today's word was "oshii", which apparently means any or all of: "regrettable; disappointing; precious; wasteful; too good for". Of course, I know English has words that means their opposite as well, but without more information how do I know whether my "oshii" will be heard as "precious" or "disappointing"?

Other such words may or may not have some deep cultural significance. "Chigai" means both "different" and "wrong": does this indicate some fundamental predisposition to conflate conformity with correctness? I don't know, but it makes me wary of using the word, for fear of misunderstanding.

Meanwhile, I've been trying to find an anime that I can watch with enjoyment after the soul-wrenching of Madoka Magica - watching which was the kind of experience that has a very lingering aftertaste. I tried a bit of ROD the TV, but although I think I would like it a lot in a different mood it wasn't for me right now. Then I sampled Code Geass - but it seems only five minutes since I watched another teenaged smartypants with superpowers try to take over the world in Death Note, and the addition of robot technology didn't add significantly to its allure. Again, I'll return to it later. I also have Summer Wars waiting on the shelf: it's from the maker of The Girl Who Leapt through Time, and I'm waiting for a moment when I might want to watch that again to try the new one.

Just in the last two days, though, I've found some much-needed genkiness with The Melancholy of Haruhi Suzumiya. It's clever, and has made me laugh out loud a couple of times, and is just what I need at the moment.

Today I finished clearing out my office, where I've been accumulating bits of paper for the last 24 years or so. It's all part of the closing down of the St Matthias site, prior to our move to Frenchay - which in my case happens a week from now. It was, as anticipated, a somewhat sobering experience, and also quite a physically exhausting one. If I weren't already given to morbid reflections on the vanity of human endeavour, trashing all those memos and forgotten essays and grand schemes might have sparked some thoughts on that theme, but as it was it all seemed perfectly normal, with even a slight bias towards catharsis. 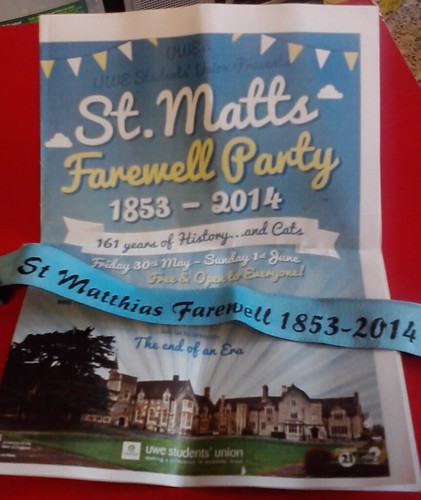 I have made some mention of foxes in recent days. The St Matthias site is four miles from my house, and lies in the opposite direction from Clifton. Nevertheless, let it be recorded that, as I was leaving the grounds, perhaps for the last time, a fox (the fox?) ran lazily across my path, ten yards ahead of me. If it wants something, I wish it would come straight out and say so.
Collapse