The River Test is a chalk-born, chalk-borne chalk bourn, that rises somewhere in the Ettinland north of Andover and hurries south as fast as it can, seeking a sanctuary for its clear waters in my home town of Romsey. There it makes a lattice of its many fingers, cracks its knuckles, and winds more leisurely through and under our streets, joining into one single stream only at the town boundary.

It's not a river that's prone to flooding, but even Romsey has been affected by recent events. Most of the houses in my mother's street have sandbags (hers is up a slight slope, luckily), and the Memorial Park where I played as a child is closed due to waterlogging from the streams that run either side of it. My phone isn't great at video, but this gives a sense of the speed of the water, even along one of the river's minor arteries:

Meanwhile, there's no way to walk up the footpath to the Salmon Leap and Green Hill - it's all over sandbags. 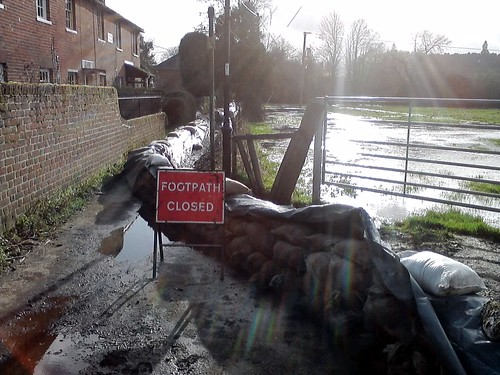 I've occasionally compared Romsey to Trumpton, and in that light the view of the bandstand is particularly affecting: 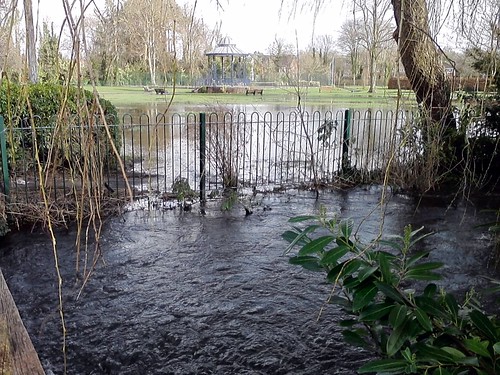 Indeed, the sight has woken in me a deep desire to write a Trumpton/Waste Land mashup...

Consider Captain Flack
Subdued to his element
Soused as a salmon
‘tache whiskers
Tenterhooked
On park railings, buttons
Popped like bindweed flowers
From the sheath.

Flack’s men from Pugh to Grub are gone,
Their sinews sinuous, weed-teased,
Piked and trouted – yet
They were elevated once, as
Tall and handsome as you.
Collapse