I've written before about my love of the shipping forecast, and quickly discovered I wasn't alone.

This morning Michael Palin, who is acting as guest editor on the Today programme, arranged to have it read by Alan Bennett. So, don a sou'wester, grab a Rich Tea biscuit, and relax...

This was the headline on the front page of yesterday's Sunday Times: 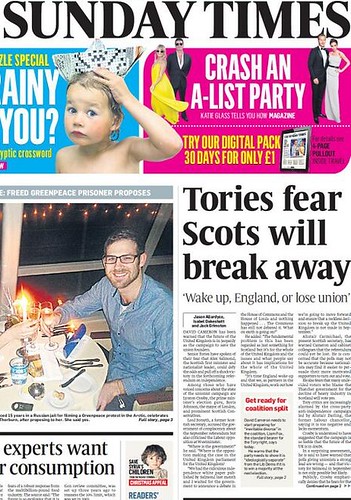 Apparently the Tories are suddenly afraid that Alex Salmond might get his independence vote next year after all. Whether that's true I have no idea. Selfishly I hope the Scots stay, if only to forestall a permanent Tory majority south of the border, but if I were in Scotland I might well be voting for independence. Either way, there's nothing I can do about it.

Which brings us to the sub-headline: "Wake up, England, or lose Union." Doesn't that strike you as a bit odd?

First, there's the casual erasure of the Welsh and Northern Irish - but that's par for the course. Second, what is "England" meant to be doing about it? Not voting against: the future of the UK is not something in which we've been given a say. Perhaps the hope is that the English legislature/parliament/assembly will take a stand. But there is no such body. The English, uniquely among the nations of the UK, have no national voice.

In short, this headline is a good example of the confusion I mentioned in one of the comments to this post back in April 2011: "there's no contradiction between the English getting the rough end of the short straw over prescription charges, etc., and at the same time being snotty about the Welsh and Scots (and often forgetting the Northern Irish entirely). I think they don't notice that there isn't an English parliament to protect their interests because at some level they think Westminster is the English parliament." So much of the fucked-upness of our current constitutional arrangements stems from this delusion. If anything good comes out of the independence debacle (as I fear it will be), perhaps it will be the determination to address this.
Collapse