Christmas was good, in the end. The weather alternated between storms and crystal sunshine, and on Boxing Day my brother, his partner and I took advantage of the latter to lever my mother out of her Parker Knoll recliner and into a wheelchair for a turn about the Abbey. The sun was so bright she had to borrow my shades. I think they suit her. 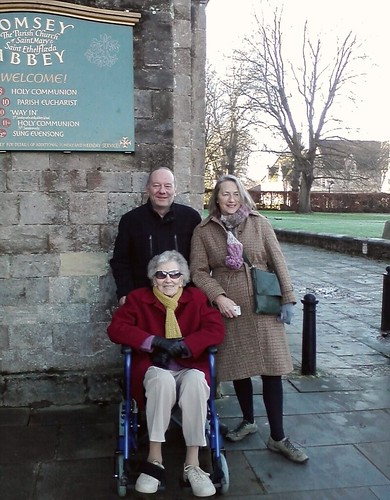 (My daughter elected to stay behind in the comfort of her new Pikachu onesie.)


Reasons for learning a language.

a) It's embarrassing - perhaps a dereliction - to be a monoglot when words are my vocation.

b) You don't have to be a paid-up devotee of Sapir-Whorf to believe that languages chivvy thought and perception along certain channels. Learning another language - especially one that grew out of a very different culture - opens up new ways of thinking about the world, and ...

c) ... at the same time gives you a perspective onto your own culture. In a world without mirrors, you'll never see the back of your own head.

d) The sheer ubiquity of English combines with monoglottery to be a source of obscure shame and embarrassment, either because

i) it makes it seem that English speakers are especially lazy and dim, and that everyone else has to make special allowances for our linguistic incompetence, or else
ii) it's a sign of arrogance, because we largely don't have to learn other languages. (Digression: the British exported English to many places as part of building the Empire, but it's only since we outsourced Anglophone imperialism to the Americans that it's really become a global lingua franca: at the British Empire's height that role belonged to French. The mechanisms and history of this shift deserve further study.)

ETA e) It's ironic that I forgot this one, because it's about memory training. At this point in my life it's a long time since I had to memorize long lists of anything. I have to use my brain for thinking, but not so much for learning by rote. Language learning makes you do that.


A few months ago I posted a picture of the protest against developers at some allotments in St Werburgh's. I was pleased to see, walking past there yesterday, that the campaign was successful. Pleased, but not surprised. Despite the jolly pic the folk of St Werburgh's are pretty hardcore, and I like to think that more than one developer woke up to find a severed head of lettuce on their pillow. St. Werburgh's - putting the "Eek!" into "eco-warrior."
Collapse