I went to Taipei today. I can't claim to have done anything very exciting there: it was wet and quite cold; I was there too early for the night market and it was the wrong day for the jade and flower markets. Even the Taipei Tower didn't want to play - 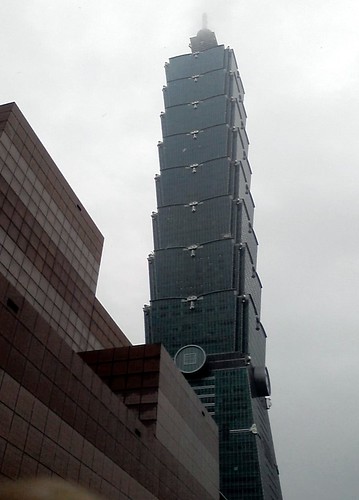 - but I had a look round, and bought tickets at stations and things in shops, and managed to make myself understood even when the other person had no English, and overall my confidence was buoyed as a result. I spent most of my time in shops, where I would have felt awkward taking pictures, so I have little to show - but imagine me if you will going round the malls in search of the perfect souvenir to bring back to England (at a reasonable price), one that would carry all the exoticism and mystery conjured by the words "Made in Taiwan".

It was surprisingly difficult to do. A lot of the mall shops were American or Japanese (or even British) chains, and even those that weren't were very heavy on English. I was torn between grateful relief at being able to understand what I was looking at and the urge to demand loudly that I be taken to the "real" Taipei. The former won quite easily, I'm glad to say, but it didn't solve my gift problem. I could have bought some nice tea - and in fact I did - but since no one else in my family cares for anything but Tetley I'll have to give that to myself. I suspect the same fate awaits my Bunny King mug - which turns out to be from the People's Republic rather than Taiwan: 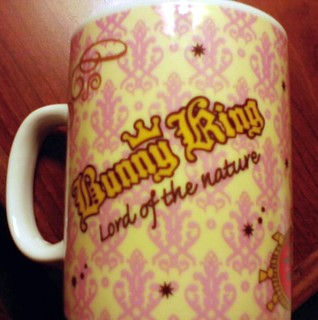 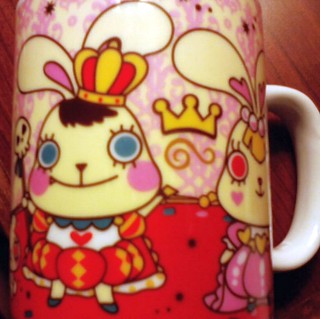 What's not to love, I say - but tastes may differ. Eventually I found one or two promising items - but must not post them here in case a potential recipient should happen by. Instead, since I'm aware that I haven't included any traditional buildings yet, have a local temple from a couple of days ago. (I saw far more impressive ones from the train today, but they flashed by too fast - and besides, I like this one's neighbourhood vibe.) 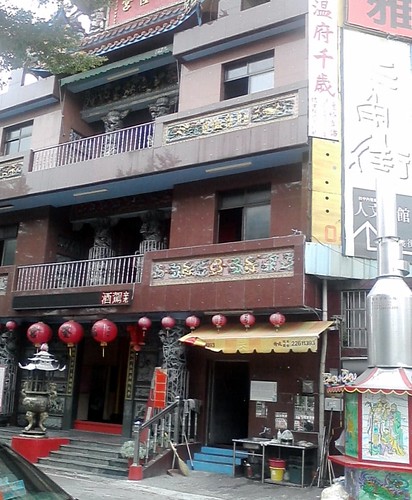 My companion (Chinese but not religious) thought that this particular temple was Daoist. The oven on the right is for burning money as a gift for the ancestors. Ancestors have their own currency though, so you have to buy special notes manufactured for the purpose. It occurs to me that whoever prices those notes for sale in mortal shops is, effectively, fixing the exchange rate with the afterlife. What responsibility!

Tomorrow is the main event of my visit - the keynote at this symposium, after which I go to the airport hotel, before an early flight back on Monday. So, I'll be signing off here for the next couple of days, until I reemerge (d.v.) back in Bristol.
Collapse