In Plato's Phaedrus, the Egyptian king Thamus famously disparages Thoth's invention of writing, claiming that it will tend to weaken the powers of memory, and give people the illusion of wisdom, simply because knowledge will be at their fingertips.

He had a point on both counts. For example, when I began to think about this topic my recollection was that it was Thoth, not Thamus, who disparaged writing - but a quick internet check soon corrected my bad memory. If I'd been writing in the pre-internet age, I'd have looked it up in my copy of the Collected Dialogues, which I can see from where I'm sitting. Either way, if I'd then chosen to write a post like this one it would have looked as if I'd known it all along, which would I suppose would have been deception of a sort. On the other hand, isn't it better that I'm not spreading misinformation?

Probably Thamus was too negative, looking at only one side of the equation and ignoring the extent to which knowledge is a communal possession and a community enterprise. Still, haven't I avoided getting satnav for precisely his reasons? And I didn't I feel justified in that stance the other day, when I was told of a woman who had visited the house in the Gower four times before letting drop a remark that revealed she believed herself to be in North Wales? Driving from England, she had blindly followed the satnav's instructions, and knew no better. I can hear Thamus scoffing now.

Digression: I assume that in illiterate societies mistakes do occur in the transmission of stories and learning, even well-trained memories being fallible. I wonder if they happen in universal and systematic ways, so that they can in principle be reverse-engineered from the ways that stories are told at later dates - rather as philologists are able to work out the form of long-dead languages by studying extant ones? Are there people who do that kind of thing, combining cognitive psychology and narratology? Palaeosemiologists, shall we call them? I assume Jacob Grimm had something of the kind in mind when he turned his mind to studying Teutonic mythology, but what became of that fledgeling science thereafter?

A few days ago I posted a poll about the countries of origin of various popular TV franchises. What I didn't take into account is that relatively few people on my friends list watch these programmes, and so the number of participants was small. Still, I was impressed at the honesty of those who did fill it out - clearly no one cheated. For what it's worth, here's a digest of the results.

I doubt whether any of these results are statistically significant given the small and skewed sample, but it's still tempting to spin some conclusions from their pretty silk. It would be interesting to know how many of the answers were based on knowledge and how many were a best guess at the kind of show likely to be produced in these particular countries. Dating in the Dark, for example, has the element of humiliation common in many Japanese shows from Endurance to Takeshi's Castle and, er, this - but in fact it's just another Endemol concoction. Did people guess correctly about The Apprentice and Top Model being American because they knew that to be the case, or because those shows seem American in spirit? As to why The Voice was perceived as Australian, we can only speculate. (Australia was the joker in my pack: I'm not aware of any widely franchised show that was invented there - unless you know different?)

Do you remember the pink cat ring in The Cat in the Hat Comes Back? It starts life as an unsightly ring in the bath... 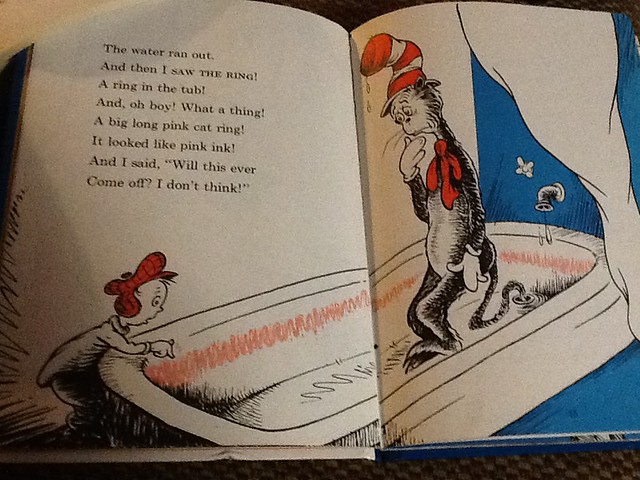 ... but every time the Cat tries to clean it away he finds that it simply moves onto other objects. Eventually he calls on some of the smaller cats who live in his hat to try and get rid of it, but instead they spread it around until the entire house and even the snow outside are coloured pink: 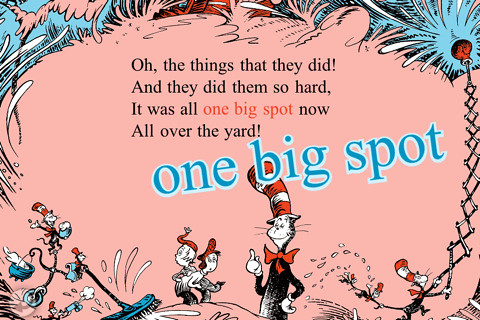 The parallels with President Obama's current dilemma are striking. In August 2012, he just had a simple red line to deal with. It came from a remark about his administration's view of the Assad regime ("a red line for us is we start seeing a whole bunch of chemical weapons moving around or being utilized"). Since the chemical attack in Damascus, however, the red line has been steadily spreading, with some help from the smaller cats the President keeps in his hat. According to John Kerry, "This debate is also about Congress’s own red line", and latest reports indicate that the red line has spread over the entire planet, with the President now arguing that "This debate is about the world’s red line. It’s about humanity’s red line."

At this point in the book the Cat's solution, like Obama's, is to call up even more cats:

My cats are all clever, my cats are good shots
My cats have good guns, they will kill all those spots.

However, this proves to be counterproductive:

"All this does is make more spots!" we yelled at the cat
"Your cats are no good - put them back in your hat!"

In the world of fiction, there is a way out. The final cat, Cat Z, who is atomic in size and power, has a special substance in his hat called Voom, and "Voom cleans up anything, clean as can be." 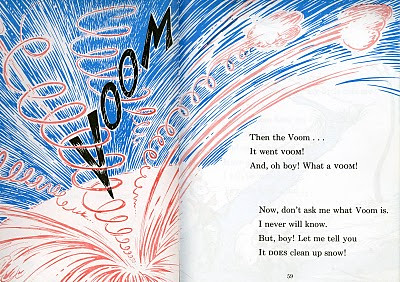 Obama too has a substance called Voom, though I trust he would never use it. Meanwhile, the red line blankets the world, and all the dei ex machina have absconded. I'm sure the President would rather be in the world of Dr Seuss.
Collapse