One of the things I like about living here is that my house is fifty yards from a railway line. The same was true of the house where I grew up, and there's something intensely and atavistically comforting about the sound of the not-very-distant trains clacking over the points on their way to who knows where, especially when I hear it from my bed at night. The world is turning and the train wheels are turning with the world, tracking the orbits and epicycles of the Ptolemaic cosmos that is Network Rail, following paths that I could take and perhaps will - soon, but not now. The train that Chihiro sees (and later rides) moving through the shallow seas of the kami-world conjures the same sense for me, of adventure and security in one. That whole part of Spirited Away is very familiar, and indeed one route to my recurring dream country has always been by steam train across water meadows.

The other great benefit of living near a train track is of course the blackberries, which ran before the foxes into the heart of the city, making the railway their artery of choice. Even in hard economic times the British are not a great foraging nation - something for which the industrial revolution and the enclosure acts must share the blame - but many people round here do at least remember to go blackberrying, so today I took a stepladder with me, hoping to tap previously inaccessible reserves (this is to blackberrying what fracking is to oil exploration). I felt a bit silly, but it really worked. The hedgerow canopy was pristine, with nothing but butterflies and bluebottles for company, and my bag filled quickly. On my return I picked a few of the early apples from my tree to make a crumble filling. Organic + Free= Delicious on principle, but I hope that it also tastes good. [ETA: It did.] 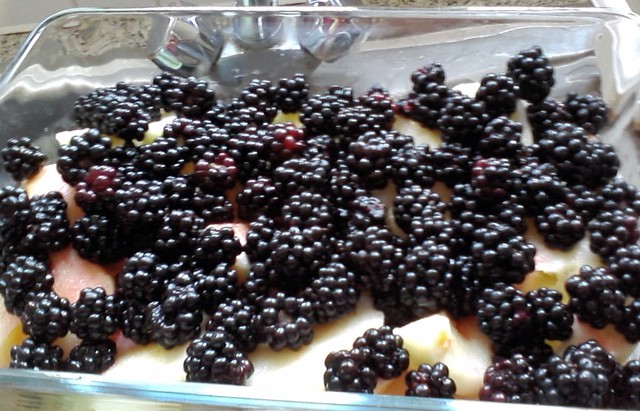