ethelmay yesterday that I was an admirer of Gwen Raverat's Period Piece, and in some ways took it as the model for what my family history entries should aspire to, if I ever have the energy to link them into a connected narrative. Of course, in the Darwins Raverat had Premier League intellects to write about, and the Butlers belong to a rather lower division, but in their humbler style they too give interesting glimpses into the intellectual life of the nineteenth century. Indeed, there are a few - albeit tenuous and fleeting - points of direct connection between the two families. The most tangible is the fact that Darwin's cousin, Francis Galton, married my first cousin four times removed - which makes us more or less siblings, right? Then there was the embarrassing time when my great-great-grandfather diddled Alfred Russel Wallace out of sixpence, much to the latter's annoyance. But the most direct connection with Darwin himself is through the diddler's son, Arthur Gardiner Butler (1844-1925). Arthur worked for the British Museum's zoological department (they had one then), and like so many people he corresponded with Darwin on scientific matters. The Darwin Project doesn't yet have the full texts of the letters online, but I look forward to hearing about not just birds and butterflies, Arthur's areas of expertise, but also "the pugnacity of a stickleback" (29 June 1871) and the recent birth to a woman of a baby "half bear, half human" (18 July 1871). I rather like the fact that, while Darwin had his Galapagos Finches, from observation of which he hatched the theory of evolution, Arthur was the author of that useful early work of aviculture, Foreign Finches in Captivity (1889) - a book also the result of minute observation, but somehow less momentous.

As a sample, his chapter on Zebra Finches is online. It's actually quite lively: it's hard not to be drawn to someone who writes: "In the bird room they willingly take possession of the nests of other birds, yet not so shamefully as the Ribbon Finch." And something of the naturalist's material world is captured in: "I found no difficulty in breeding this species, which will build either in a German canary cage, a travelling cage with the door fixed partly open, a fig drum with entrance hole at the side, a log nest, or a cigar box." 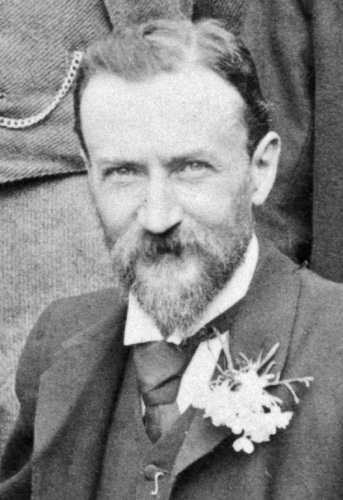 Arthur looks like a man who enjoyed a cigar

The Zebra Finch's call, apparently, is "like that produced by a penny wooden trumpet" (thrill to the melancholy of an obsolete simile!) and no doubt the publications of Arthur and his many siblings are but a penny trumpet next to the mighty brass section of the Darwins, but I'm still inclined to toot it as opportunity arises.

Next time, we'll dip into his brother Edward's translation of Gustaf Valfrid Vasenius's Outlines of the History of Printing in Finland (1898). I, for one, can't wait.
Collapse