As readers of this blog will know, I appreciate a good pun - and a bad one still more so. Hence my suggestion to a visiting Turkish scholar that we meet this morning in the local patisserie, Bristanbul. I worried it might be coals to Newcastle, but being new in the country he was pleased to have a taste of home, I think, and I have returned with a generous present of baklava.

Walking back up the Gloucester Rd., I saw this... 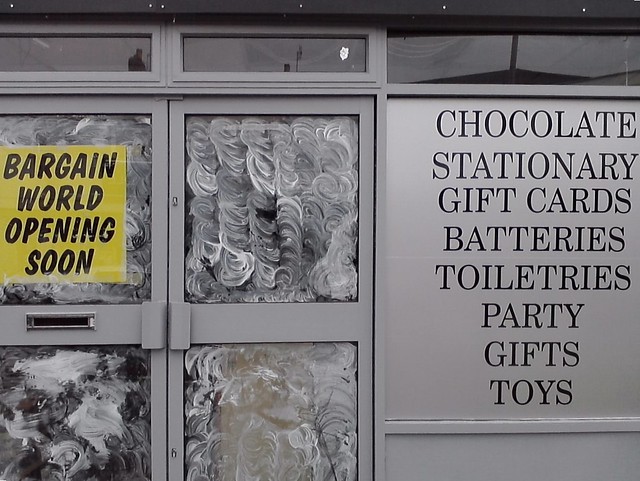 I try not to be a spelling nerd, but it saddens me to find mistakes enshrined in the fronts of shops that haven't even opened yet - and stationary/stationery is basic. Will they correct it, or will they try to brazen it out, like Bristol's machine hire firm, Alide Hire Services, whose lorries always give me a start when I see them? For a while, I thought "alide" must be some kind of technical (chemical?) term, but now I'm almost convinced that it's just a spelling error that stuck. Though it occurs to me that it may be a portmanteau. Was Alide Hire Services named after Alison and Derek, the way Tesco is (or isn't) a shortening of Tessa Cohen?

A little further up, I saw this... I hadn't realized till I checked that Sinbad could be spelled Sindbad - that indeed, it derives from the Sindh river. I suppose the pun lurking in Sindbad might have discouraged the prudish from retaining the "d" - even as it inspired the neatest (if apocryphal) imperialist telegram in history, "Peccavi" - which Napier really ought to have sent on capturing Sindh province in 1844, but which was actually invented by the teenage Catherine Winkworth.

Passing a fuchsia bush, it occurred to me that even in the wacky world of English orthography that flower holds a very special place. It's named of course after a German Mr Fox, and "ought" to be pronounced "Fucks ya". Was it too changed for reasons of prudery - the way the Victorians changed Piddletown to Puddletown? How did they pronounce "fuchsia" in the more unbuttoned seventeenth century?

One of many things I love about the Gloucester Rd. is that, if I keep walking up it for another 30 miles, I will indeed end up in Gloucester. Which gets me to wondering about the non-rhyme between "puddle" and "middle", and what Dr Foster really stepped in.
Collapse