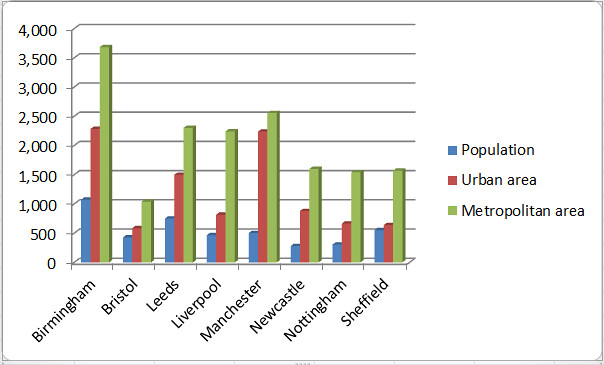 I'm not a city person by upbringing or vocation. However, I've now lived almost half my life in Bristol, which is the sixth biggest city in the UK England - a fact that may call for some explanation. Bristol has many charms and I could expatiate on them at length, but this chart gives a useful statistical clue as to what makes it so livable for someone like me. It shows the UK's England's eight most populous cities outside London, measured by the actual city population, the surrounding urban area, and the metropolitan area - all in thousands.

As you can see, going by the city population alone Bristol is not by any means the biggest, but it's still more populous than Newcastle or Nottingham, and not far off Liverpool and Manchester. However, once you throw in the surrounding urban sprawl that major cities inevitably accumulate, the picture changes. Going by urban area, Bristol becomes by some distance the least populous of the eight. Casting the net still wider to metropolitan area the effect is accentuated: it is smaller than any of the others to the tune of half a million people.

What does this mean in practice? It means that Bristol is much closer to being a polis in Aristotle's sense. Being the only major city within a 45-mile radius, it is inevitably the site of regional amenities, and these are almost all within easy walking distance of each other. From nearly anywhere in the city you can see green fields on three or four sides (for, like Rome, it is built on many hills). It is connected, but independent; capacious, but not smothering. Given that my work means I have to live in a city, it's hard to think of one that would suit me better.
Collapse