A long time ago, in that land of hot summers and child abuse they call 1976, my little home town of Romsey became briefly famous. Archaeologists and restorers were working on a twelfth-century wall painting in a chapel of the town abbey when they discovered, hidden behind one of the painted stones, the remains of a rose - placed there by an unknown hand more than 800 years before.

It didn't take long for imaginations to go on a country ramble. The Abbey had been a convent back in the 1100s, and it was easy to picture some kind of Heloise and Abelard scenario, with a nun and a young priest, or possibly nobleman, immuring the record of their love in this trysting place visible only to God. The national newspapers picked up the story of the "Romsey Rose", and it made for a charming filler article around the stuff about the IMF and the drought. It was all rather exciting.

Unfortunately, when the results came back from the lab it turned out that the rose was actually a particularly unromantic species of onion. The new consensus was that it was the remains of a medieval workman's packed lunch. The newspapers ran a second wave of articles poking fun at the bumpkins and their flights of fancy, and went away.

The "Romsey Rose" is still on display in the Abbey, but it quickly faded from public consciousness. Googling just now I see one person mentioning that it was discovered in Victorian times, which makes me feel very old.

Then, in 2005, Waitrose paid for this sculpture to be erected just outside their shop. 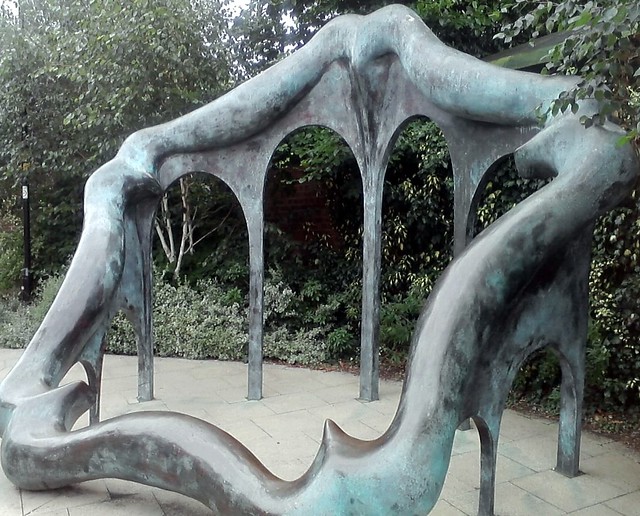 For several years I hurried past this rather ugly object, which I assumed to be a stylized representation of the jaws of a great white shark. But yesterday I looked at the accompanying plaque and discovered that it is called "The Romsey Rose". However, although it mentions the Hampshire Rose (a heraldic flourish of which I had not previously heard), and invites people to touch, sit on and walk through it (while sternly forbidding climbing), it makes no mention of the real Romsey Rose at all. 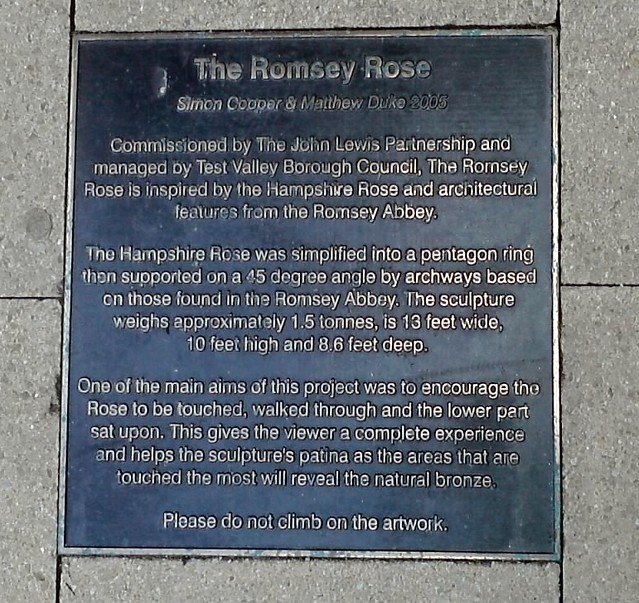 For oh, for oh, the hobbyhorse is forgot, and such acts of careless oblivion make me sad - foreshadowing as they do my own destruction and return to the dark. For which of us, my friends, can say that we are truly roses and not onions in the sight of Eternity?
Collapse