If you ever want strangers to come up and talk to you, I highly recommend copying kanji in public. I often go to a cafe to do this, and I have a notebook devoted to the purpose, which reveals to the untrained eye (they mostly are untrained) pages of Chinese writing - although of course actually just a random series of characters. People often ask me about it: is that Chinese or Japanese? Why are you learning it? Is it hard? The most recent was the guard on the train to York, whose daughter was teaching herself for much the same reasons as me, but he was only the latest in a long line. I haven't received anything like the same amount of strangerly attention since I went to those same cafes armed with babies.

Of course, once they find that I'm not only willing to talk but that I'm only too willing to talk (for the kanji furrow is a lonely one) they soon edge away, curiosity sated. The one man whose willingness to talk about kanji exceeded my own turned out to be on day release from the local mental asylum, as he cheerfully admitted. Perhaps there's a lesson there.

I think I said I would occasionally post some of my favourite kanji. This, which stands for yume (dream), is rather beautiful, I think, being composed of the elements for flower, eyes, cover and evening (in descending order). As Justice Caulfield said of Mary Archer - has it not fragrance? 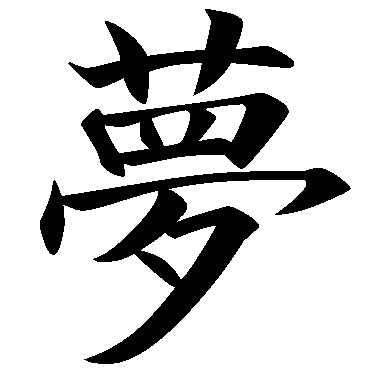 Defenders of the House of Lords often advance the idea that, although it has no democratic mandate of any kind, this deficit is made up for by the wisdom and expertise of its members. This strikes me as being about as persuasive as "I'm sure Will and Kate will make great parents - they have such lovely smiles." Having heard the ludicrous arguments advanced in the Lords against same sex marriage recently, along with innumerable editions of Today in Parliament, frankly I'm not inclined to rate the majority of the cronies, clerics, timeservers and superannuated buffoons who festoon the red benches as some kind of intellectual elite.

But don't take my word for it. Here's Lord Howell of Guildford in Surrey, arguing what his son-in-law George Osborne no doubt believes but is not yet oblivious enough to say out loud, about the environmental effects of fracking:

Would you accept that it could be a mistake to think of and discuss fracking in terms of the whole of the United Kingdom in one go? I mean there obviously are, in beautiful natural areas, worries about not just the drilling and the fracking, which I think are exaggerated, but about the trucks, and the delivery, and the roads, and the disturbance, and those are quite justified worries. But there are large and uninhabited and desolate areas. Certainly in part of the North East where there's plenty of room for fracking, well away from anybody's residence, where we could conduct without any kind of threat to the rural environment. So would you agree with me, that the distinction should be made between one area and another, rather than lump them all together?"

Of course, he has now left skid marks on the wool sack from all his hasty back-tracking - but you know fine well he means it.

While we're here - via Cheryl Morgan - the Brighton Argus dropped a turd of an article onto the mats of its many GLBT readers in the wake of the UK's Europes first trans* pride festival last week - noting its existence only at the end of an article about a local dog show.

Stay classy, Argus. [ETA: The Argus has now apologized, and is running a proper article on the event in tomorrow's paper. Result!]
Collapse