I'm back from my brief visit to York now. It's one of those places that's so beautiful that it hardly seems worth taking pictures, because to select one beautiful shot is to provoke the question of why you're not taking all the rest. I lived there for four years in 1980s, and while I came to love it for many things I think the main one is its quality of containing innumerable different periods at once, and in jostling profusion. Bath, for instance, has buildings from various periods - a fine medieval abbey, modern office blocks - but it's a World Heritage site because it's basically a Georgian city. York, by contrast, can do Roman, Viking, several different flavours of medieval, Elizabethan, Georgian, nineteenth-century industrial, and modern - all in decent portions and all mixed charmingly together. (It's little weak on baroque, but Homer nods.) I suspect that this is precisely what would prevent it becoming a World Heritage site, because the people who award such honours like all-of-a-pieceness, and I'm heavily into the mongrel aesthetic. Still, poo to them.

I wanted at least to snap the house where I lived for two years as a postgraduate. It was York's first manse, built 1759 (I would occasionally hear John Wesley snoring in my room - or if not him, one of his entourage). Unfortunately they were digging up the road right in front of it, and I couldn't get a good shot. Instead, I took this picture of the pub over the road, which doubled as my living room during that happy time. It too is a bad shot, due to being back-lit, but the penumbra is rather appropriate. 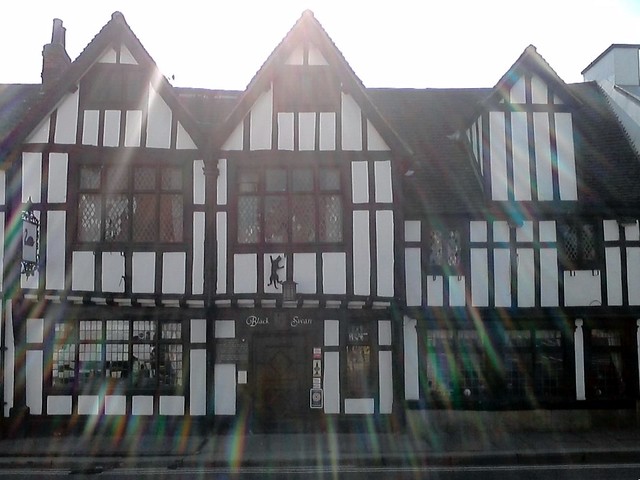 And now, visits to my mother aside, I'll be in Bristol for a good long time. Up until the end of August, anyway, when I'll be heading west into Wales - past Newport and Cardiff, where the M4 is still a good broad road, past the place where it dwindles into a two-lane highway, and then a dirt track, to the point where it becomes a wild-haired cackling woman who'll carry you over the mountain on her back in exchange for comfits and crab apples - and so south into the Gower. But that's another story...

I'm now at the 600 kanji mark. Of course, I'm forgetting them almost as fast as I learn, but flashcards do help to bed them in, and in general my stock accretes.

Which leads me to ask - has anyone here tried skritter.com? The daughter of my York hosts is in Beijing, and apparently recommends it as a way of learning Chinese, but I see the site also has a Japanese string to its bow. Not that I'll venture there until I've finished Remembering the Kanji, as I don't want to mix systems, but it might be useful for reinforcing stroke order, which Reviewing the Kanji doesn't help with.
Collapse