I don't suppose I'm alone in finding Landseer's "The Cat's-Paw" by far the most disturbing of his paintings: 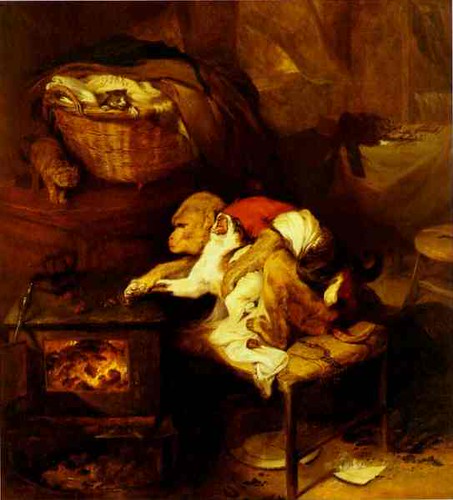 For reasons I can't now recall I was searching for it on the web this morning, and the first description I found was from a coffee table book called The Cat in Art by Stefano Zuffi: "This painting, marked by subtle cruelty... shows a monkey trying to burn the cat's paw by holding it over a brazier."

No, no, no! This totally misses what makes Landseer's painting so shocking. The monkey isn't "trying to burn the cat's paw" at all; it's trying to get the chestnuts. The cat's paw is entirely a means, not an end. Compare and contrast this sixteenth-century illustration of the same story, by Marcus Gheeraerts the Elder: 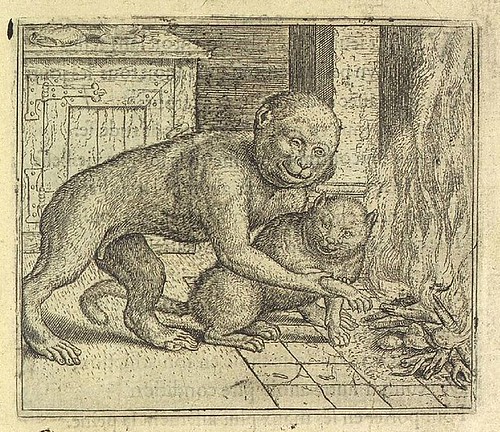 It's hard to read a monkey's expression, but it seems to me that there's a sadistic smile on Gheeraerts's monkey's face. It wants the chestnuts, yes, but it's also enjoying the control. That's disturbing too in its way, but it's a common-or-garden cruelty. Landseer's monkey by contrast barely knows the cat is there: if it had seen the poker first, it would probably have used that. That is the face of evil in our own times. That is the face that collapses factories in Bangladesh for the sake of a cheap Primark T-shirt. That is the face of ATOS, staring fixated at the bottom-line chestnuts and not caring how many people must be burned to get them. I don't believe for a moment that people who shop at Primark are "trying to burn the cat's paw". But the factories still collapse, and the dust spreads thinly over all of us.

With her two brothers this fair lady dwelt,
Enriched from ancestral merchandize,
And for them many a weary hand did swelt
In torched mines and noisy factories,
And many once proud-quiver’d loins did melt
In blood from stinging whip;—with hollow eyes
Many all day in dazzling river stood,
To take the rich-ored driftings of the flood.

For them the Ceylon diver held his breath,
And went all naked to the hungry shark;
For them his ears gush’d blood; for them in death
The seal on the cold ice with piteous bark
Lay full of darts; for them alone did seethe
A thousand men in troubles wide and dark:
Half-ignorant, they turn’d an easy wheel,
That set sharp racks at work, to pinch and peel.
Collapse