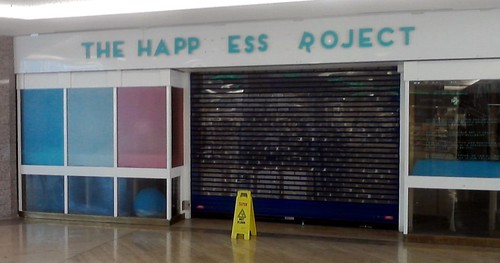 sovay mentioned her poem "Delenda", which got me to thinking a little about Cato the Censor - a man who is said to have learned Greek in his old age despite his hatred of all things Hellenic. Did Mrs Thatcher ever take seriously to learning French? Possibly, though I suspect she'd have found the idea somehow unpatriotic. The delenda bit, however, she clearly identified with, except that the state she had in mind was the welfare one - or rather the communitarian spirit of which that state was one of the fruits, for which I can find no better general name than the Happiness Project. It's memorialised in this melancholy object trouvé, which I happened across today amidst the pigeons and litter of Bristol's increasingly-seedy city centre.

The seediness is not exceptional, though today much of the state is being sown, as Carthage was, not with seed but with salt.

On which note, let me recommend to you this post by

la_marquise_de_ - which has an excellent suggestion of a more positive way to mark the passing of the Ferrous One.

I hope everyone in Boston is okay?
Collapse