Yesterday afternoon, seeing the unfamiliar sun taunt me from the far side of the window, I cast my springcleaning marking aside and made an impulse trip to Glastonbury. I'm trying to do more walking these days, and while there are plenty of lovely walks to take in Bristol, it came to me that this would be a very good day to climb Glastonbury Tor. And so it was. The Tor has a steeper side and a shallower side, and I approached by the shallow way, stopping off at the Chalice Well spring en route. I've passed these contemplative gardens many times without (for various reasons) ever looking in, and I'm glad I did so this time - led partly by the memory that they had been the basis for a scene in The Merlin Conspiracy, but mostly by the weather. I supped at the ferrous waters of the red spring, and sat for a while, sharing the space only with a small party of Dutch tourists and various middle-aged and elderly women in knitted woollen hats who were dotted about the place, evincing an air of thoroughly practical mysticism and groundedness. None was hugging trees, but some had taken saplings by the arm to see them across the road, as it were. It was a place for retired Dionysiacs, or al fresco Quakers - at least on this day. In other seasons, other aspects. Here is one of the pools, looking vernal: 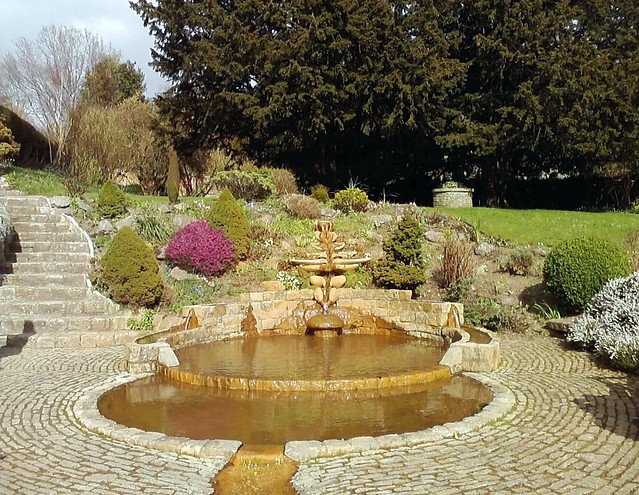 Then up the Tor, where I huffed and puffed more than I would have liked. I won't trouble you with misty skylines, but I was pleased to see the metal plate at the top waiting to welcome me by name: 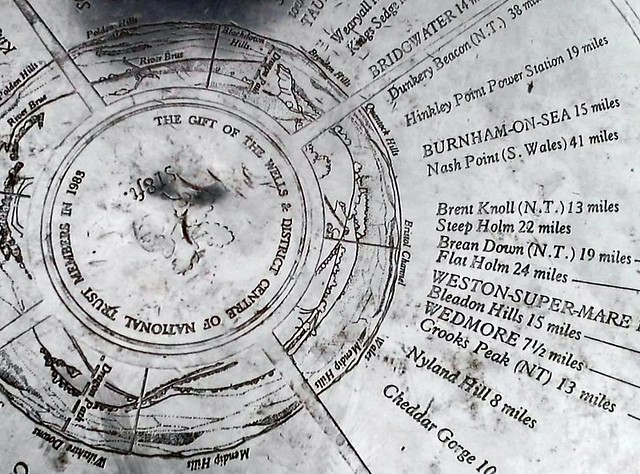 I wanted to come down the steep way, but missed the fact that there was a helical path, so went straight down over the grass - which I should certainly not have done, according to a sign I discovered once at the bottom. I was already convinced by then. I didn't actually fall, but I'd come rather close, and while I don't suppose I'd have killed myself, sliding down a sheep-dropping scree is never a good look. At this point the sun was just catching the terraces in the Tor's flank. Not a Spiral Castle, perhaps, but a Concentric one:

From there, a short country lane back to Glastonbury, which I was just approaching when I heard a sound of ecstatic ululation emanating from some rather industrial-looking doors to my left. The doors were in fact flung open, and inside I could see candlelight and standing water - a sight that instantly brought to mind the Basilica Cistern in Istanbul. Peering in, I saw dimly - but heard clearly - water gushing into a large raised pool directly in front of me, and could just make out numerous channels of water, streaming over the floor at paddling depth. In various alcoves were shrines decked with candles and flowers, and votive offerings with matching votaries. In one part a young woman was playing naked with a dog. In others stood more of the grounded mystical women in woolly hats. All was reflected noise and light, and the running water in which Glastonbury is so rich.

That, apparently, was the White Spring, a chalky counterpart to the ferrous Red Spring of the Chalice Well, disguised as a disused pumping station. I'm very pleased to have found it, and even more pleased not to have known of its existence beforehand: these things are better stumbled upon at first, and visited later in sandals.

mevennen's house, where I was given a welcome cup of tea and a hot cross bun and had these mysteries unfolded to me. Altogether a very pleasant afternoon in the land of glass apples.
Collapse